At the beginning of the year, Lloyd Carney took the helm of networking vendor Brocade.

After nine months as CEO, Carney explained during Brocade’s Analyst Day today what he has done to put Brocade on the path to success. One of his key initiatives focused on operational efficiency and cost containment.

“We are reexamining every dollar we spend,” Carney said.

That process is a very precise one, with Carney commenting that the cost cutting isn’t being done with a hatchet, but rather with a scalpel.

Carney also wants to make sure that enterprises know how serious his company is about the data center. He noted that according to recent IDC stats, Brocade is actually number two in the market, behind Cisco, in the data center networking market.

While Cisco this week has pushed the message of enabling the Internet of Everything, Brocade has no such interest.

“We don’t do the network of everything,” Carney said. “I have no interest in networking my fridge. We’re all about the data center.” 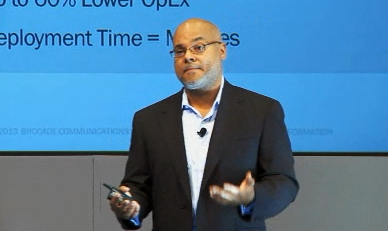 The key for Carney is the realization that network virtualization needs to occur. He noted that server virtualization is now the norm, and the trend must come to the network as well. There is no longer a need for multiple boxes in a data center, all doing different networking functions, when those functions can all be virtualized in a single box.

“We know with certainty where the puck is going and we’re gliding right there,” Carney said. “The end result is that we’ll enable our customers to be more efficient so they can do more with less.”

“Our major competitor is building integrated stacks and closed solutions that drive them to compete with the people they used to partner with,” Carney said.

As an example, he noted that Cisco’s UCS server business now makes them competitors with partners. Brocade plans to try to benefit from that partner dislocation.

“The enemy of my enemy is my friend,” Carney said. “They have been creating enemies and we have been making friends.”