Juniper Networks kicked off its annual NXWORK event in San Francisco on Dec. 12 with a series of announcements about its Contrail software-defined networking (SDN) technology. Juniper executive management also used the NXWORK event to highlight the firm’s overall approach of network simplicity.

“Fortunately at Juniper we have a secret weapon and one that I’m so very proud of, and that’s Contrail,” Rami Rahim, CEO of Juniper Networks, said during his keynote. “The way we have been investing and innovating in Contrail over the last few years is sort of similar to how a car company would invest in a Formula 1 car. It’s essentially a proving ground for the world’s best technology.”

Rahim commented that the use cases for Contrail so far have been somewhat limited, but that’s about to change.

“The future of Contrail is as a platform, a single controller that can solve a variety of really compelling use cases with ease and simplicity,” Rahim said. “Whether it’s management of overlay and underlay or SD-WAN connectivity or multi-cloud fabric management.”

Juniper originally acquired Contrail in December 2012 in a deal valued at $176 million. In September 2013, Juniper open-sourced the Contrail technology, creating the OpenContrail project.

Now at the NXWORK conference, Juniper is taking the next step in the OpenContrail project’s life and 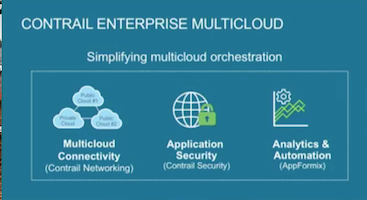 The open-source project is the base for the Juniper Contrail solution, which is also being expanded. Juniper’s new CTO, Bikash Koley, announced the new Contrail Enterprise Multicloud offering.

“The idea behind the product is we’re taking all the power that Contrail already has, as the most popular overlay SDN infrastructures, and we’re enhancing it with support for underlays and public cloud,” Koley said.

SDN has often only been considered as an overlay networking approach that goes over traditional networking hardware and networking protocols. With the new approach, Juniper will also manage the underlay, including physical networking components, to help create a common approach to managing multicloud networks.

Overall, Rahim emphasized that Juniper is working to help simplify networking through figuring out the tough engineering challenges.