The expo floor at this year’s Open Networking Summit in Santa Clara, CA reflected the continuing maturation of the software defined networking market and ecosystem, with vendors both new and established gathering to show off their SDN solutions. Back in 2011, 23 vendors exhibited at the first Open Networking Summit. In 2014, over 60 companies angled for attention in the busy exhibition hall. Here are six solutions to watch. Can legacy hardware truly deliver on the potential of SDN? Ottawa, Ontario-based Corsa Technology doesn’t think so. One of Enterprise Networking Planet‘s Five Networking Startups to Watch in 2014, Corsa debuted two native OpenFlow 1.3+ data planes, the DP6420 and the DP6440. Corsa claims its hardware addresses the scalability and functionality limitations of legacy hardware by providing flow-based forwarding “with multiple flow tables capable of processing millions of flows,” according to a company statement. Programmable and reconfigurable, Corsa’s forwarding planes are also designed for easy evolution to keep up with changing OpenFlow standards and SDN use cases. 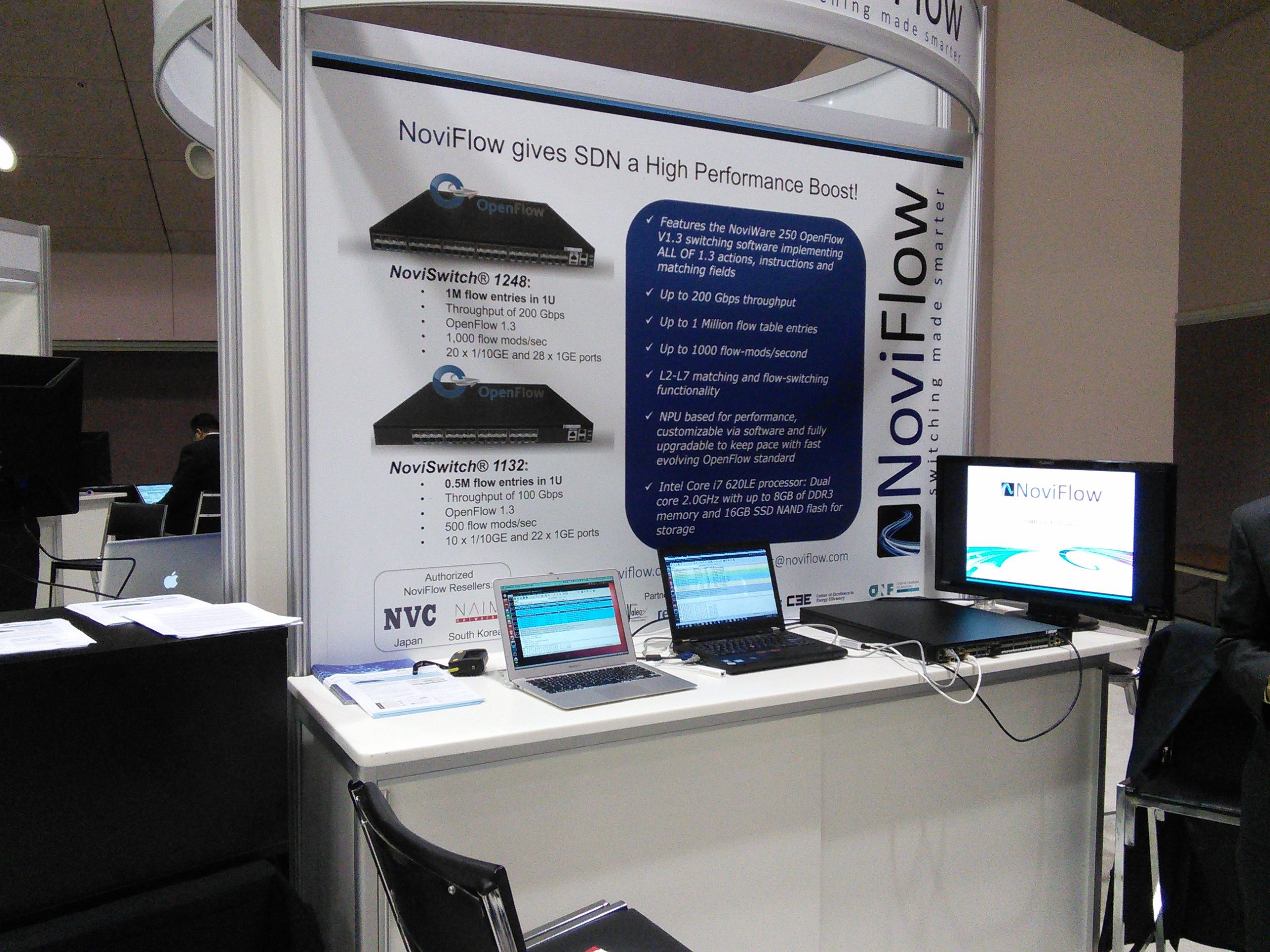 At the heart of any SDN implementation is the switch, and several vendors were on hand at ONS 2014 to make the case for theirs. The Open Networking Foundation’s first Canadian member, OpenFlow-based switch vendor NoviFlow demonstrated their new OpenFlow Experimenter feature. Designed to assist in automation, policy, compliance, and security operations within software defined networks, OpenFlow Experimenter enables L4-L7 deep packet inspection (DPI) and flow management. NoviFlow demonstrated the functionality on its NoviSwitch 1248, which supports OpenFlow 1.3. NoviFlow also announced a distribution agreement with South Korean SDN solutions vendor NAIM Networks. When problems arise within a software defined network, SDN’s much-touted flexibility, agility, and dynamic nature can also create challenges. A new crop of purpose-built solutions is emerging to solve those challenges. ONS 2014 gave Taiwanese SDN solutions developer EstiNet a platform to showcase its EstiNet 8.1 OpenFlow network simulator/emulator and its Dr.SDN diagnostics and troubleshooting tool. According to the company, EstiNet 8.1 simulates thousands of OpenFlow 1.0 and 1.3 switches, while Dr.SDN simplifies and provides accessible visualization tools for SDN troubleshooting.

Next: Radware (and Brocade) DDoS attacks and other security issues continue to threaten the health of enterprise networks, and when it comes to SDN, new solutions may be needed. Radware’s booth pushed its DefenseFlow SDN security application. The vendor describes DefenseFlow as “an SDN based adaptive attack mitigation solution” that cuts provisioning times for security capabilities, offering dynamic defense against network and application DDoS attacks as well as Advanced Persistent Threats. 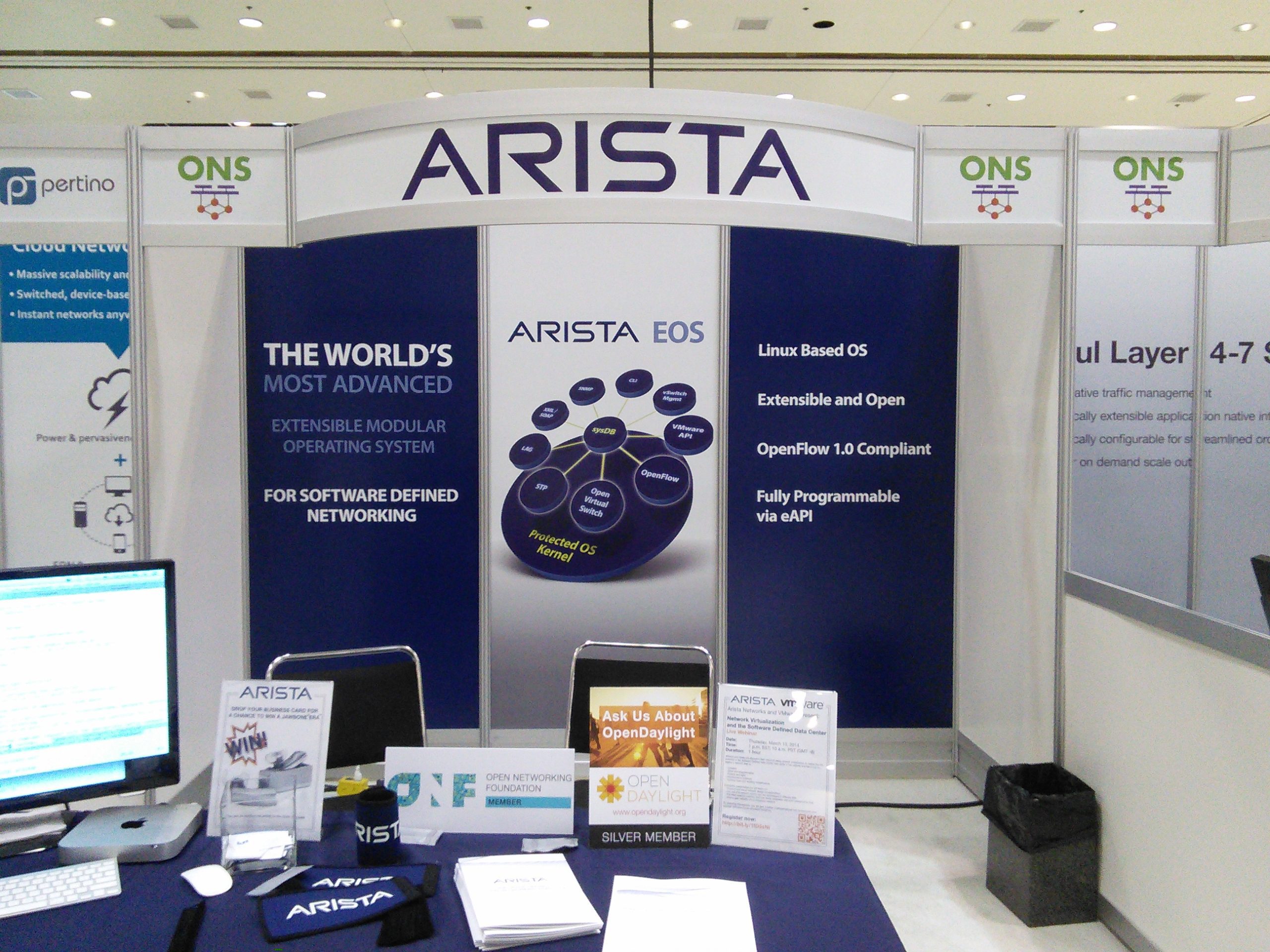 SDN and the cloud are highly complementary thanks to the scalability and flexibility that SDN promises and that cloud operators typically need to provide. The cloud is where Arista focused its promotion efforts on the ONS 2014 expo floor. Arista is pushing the concept of Software Defined Cloud Networking (SDCN), which the vendor defines as the integration of SDN technologies with its Arista Extensible Operating System (EOS). The four pillars of Arista SDCN are a universal cloud network, single-image L2/3/4 control plane, network-wide virtualization, and Arista EOS network applications with a single point of management. Arista supports this vision with a portfolio of hardware and software solutions. 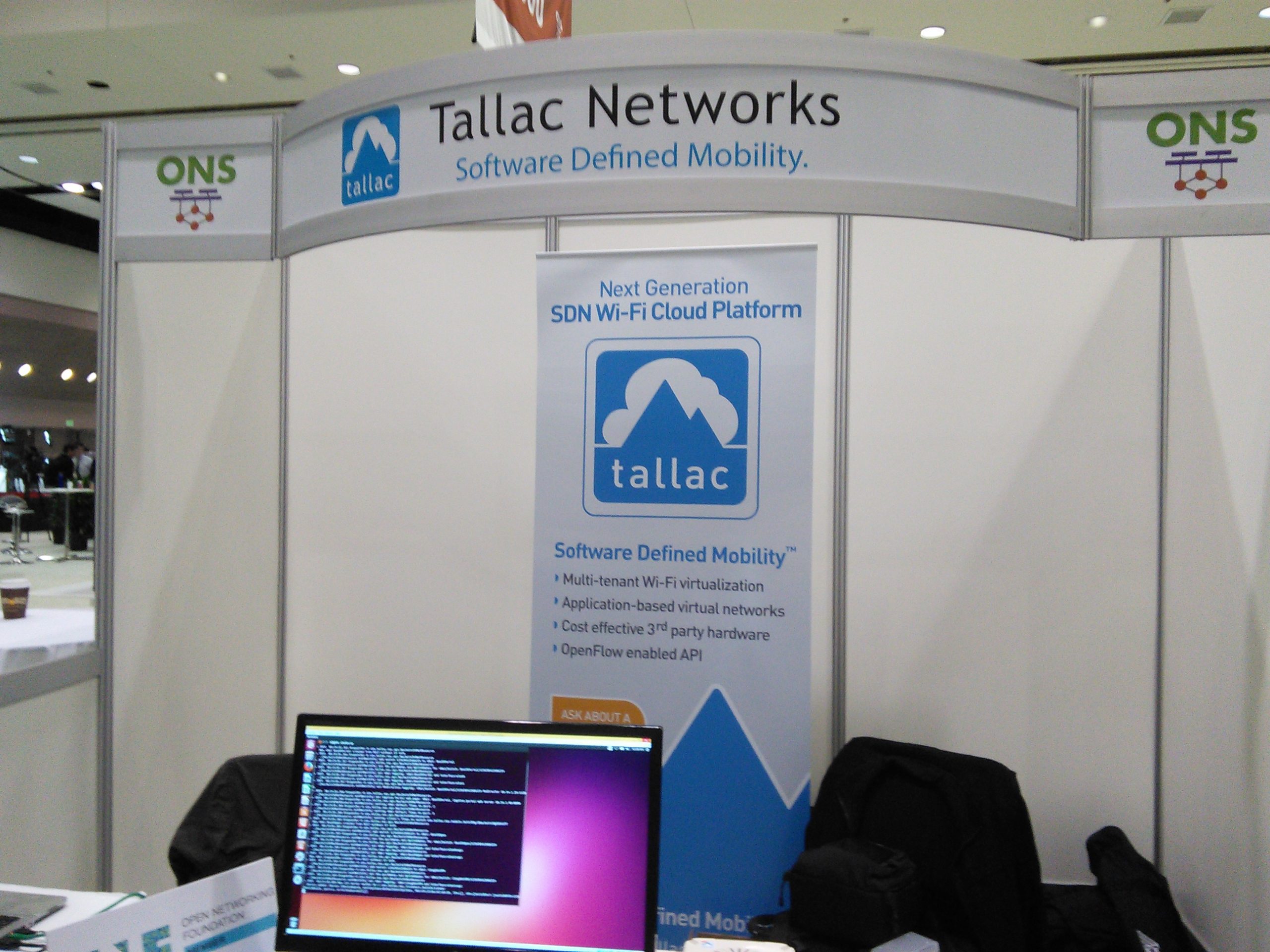 In the enterprise, SDN is an exciting concept for the future, but mobility is serious business that matters today. Tallac Networks used ONS 2014 to launch its Software Defined Mobility (SDM) SDN Wi-Fi platform. The SDM platform applies SDN concepts to wireless networking through a combination of third-party wireless hardware and Tallac mobility applications that enable multitenant Wi-Fi virtualization and virtual networks based on application needs. Tying them all together is the Tallac SDN Wi-Fi cloud, through which administrators manage their wireless networks.

Next: SDN in the year ahead

SDN: The Year Ahead As ONS 2014 showed, SDN continues to gain momentum. Emerging challenges are driving a search for better solutions, and as vendors expand and fine-tune their offerings, the software defined future looks brighter than ever. The six vendors covered here are but a few of those whose offerings we’ll be following and covering in more depth in the coming months. Watch this space as SDN continues its march from buzzword to reality.