The nascent market for Software Defined Networking (SDN) technologies was once derided by critics as being mostly over-inflated hype. The critics are now being proven wrong. New data from analyst firm IHS forecasts that $1.4 billion in revenue will be generated by SDN technologies this year. 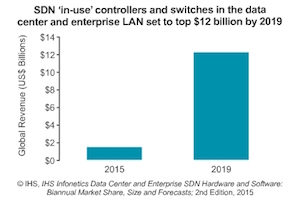 combined market for in-use SDN controllers and Ethernet switches will come in at $1.4B for the full 2015 calendar year, nearly a 100 percent gain from 2014.

“The data center and enterprise LAN SDN market will be solidified by the end of 2016 as lab trials give way to live production deployments,” Cliff Grossner, Ph.D., research director for data center, cloud and SDN at IHS, said in a statement. “In 2017, SDN will move from early adopters into the hands of mainstream buyers.”

Looking at vendors, IHS has identified Hewlett Packard as having the largest share of SDN-capable switch ports in the market today. There are a number of factors driving SDN adoption forward, including new use cases.

“New SDN use cases continue to emerge, and the first half of 2015 was no exception with the establishment of the software-defined enterprise WAN (SD-WAN) market,” Grossner said. “The SD-WAN market is still small, but many startups and traditional WAN optimization appliance vendors and network vendors have jumped in.”

By 2019, IHS predicts that the SDN market will generate $12 billion in revenue.

IHS’s forecasts for the SDN market somewhat align with other past forecasts from other analyst firms on the market potential for SDN.

In May of this year, IDC provided an updated SDN forecast, projecting $8 billion in SDN revenues by 2018.