One of the most widely deployed Wi-Fi routers in small businesses and homes around the world is coming back. At the 2014 Consumer Electronics Show (CES) in Las Vegas, Linksys announced a new evolution in its WRT Wi-Fi router line-up.

The WRT54G was one of the first 802.11g Wi-Fi routers in the market back in 2003. Due to its low price point (originally marketed at $149) and its extensibility, the WR54G became widely deployed over the years.

Linksys is now bringing back the WRT line of wireless routers with the new WRT 1900AC Dual Bank Wi-Fi Router. 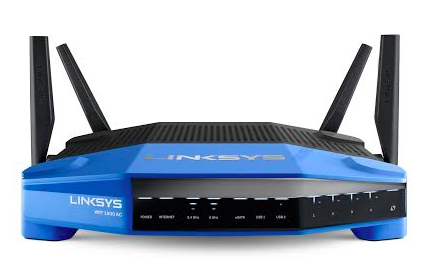 The new router is inspired by the original WRT54G with similar design and blue-and-black color scheme. Inside the device, however, a lot has changed since the WR54G era.

The most obvious change is the fact that the WRT 1900AC supports the new 802.11ac wi-fi standard which can provide up to 1 Gbps of wireless bandwidth. In contrast, the WRT54G was an 802.11g device, limited to 54 Mbps.

The new WRT 1900AC is powered by a dual core 1.2 GHz ARM processor and supports both 5 GhHZ and 2.4 GHz bands. On the uplink side, the router includes one Gigabit Ethernet WAN port and is complemented with four Gigabit Ethernet ports for LAN connectivity. Additionally, Linksys has packed in one USB 3.0 port as well as one USB 2.0 port. The device includes 128 MB of of Flash and has 256 MB of DD3 RAM.

Wireless coverage gets attention on the WRT 1900AC, which boasts four adjustable antennas for sending and receiving data. According to Linksys, the new four-antenna system provides greater range and coverage than typical three-antenna based routers.

Linksys is also including Network Map, a new access control and management feature, with the WRT 1900AC. Network Map provides users with a map of all connected devices and enables administrators to monitor and manage access.

The WRT54G platform became so popular over time in part because it was based on Linux and open source technologies that could be extended and improved by users.

There are multiple open source communities in existence today, including Open WRT, DD-WRT and Tomato, that have open source firmware that can run on the WRT54G.

The WRT 1900AC aims to enable that same kind of open source extensibility and customization. An Open-WRT version of WRT 1900AC firmware is expected to be available in the spring of 2014, when the router itself becomes generally available.

The WRT 1900AC is one of the first major product launches from Linksys since it was sold by Cisco to Belkin in 2013.

“The launch of the new WRT router is not only a celebration for the Linksys brand but for our customers too,” Mike Chen, vice president of product management for Linksys, said in a statement. “We have brought back the WRT because our customers have asked for a router that had the reliability, functionality and open source capabilities, but with today’s AC wireless technology. The WRT1900AC is the result of all these requests.”