Core routers have typically been large pieces of hardware that require non-trivial amounts of space. Juniper Networks is now taking a different size approach to core routing with its PTX3000 converged supercore router. 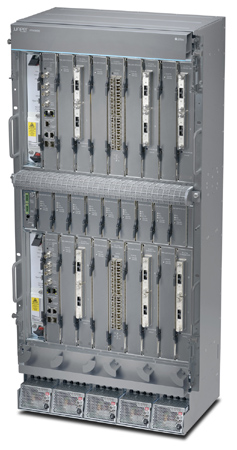 Terabits per second. Juniper has a plan to scale the system all the way up to 24 Tbps in a single box with future line card upgrades.

Mike Marcellin, SVP of strategy and marketing for the platform systems division at Juniper, explained to Enterprise Networking Planet that size-wise, up to four PTX3000s could fit in a single rack. However, to make best use of airflow for optimal cooling efficiency, Juniper only recommends two PTX3000s per rack.

“Physically it looks like 16 slots because the FPC (forwarding card) and PIC (interfaces) are housed in different slots,” Marcellin said. “Actually this aspect is one of the highlights in achieving a record breaking depth and complying with the ETSI standards for space-constrained central offices and metro POPs.”

The PTX series was first announced back in 2011. The big idea with the PTX is that it is a converged architecture that integrates packet and optical transport switching.

The older PTX5000 that is already today also has 8 slots with 480 Gbps per slot, making it twice as powerful as the newer PTX3000.

Marcellin noted that both the existing PTX5000 and the new PTX3000 have been optimized for packet transport convergence, leveraging MPLS and integrated optics to bridge these worlds.

“This starts at the silicon level, with the purpose-built Junos Express chipset that was built to deliver transport characteristics (e.g. high resiliency, low latency and jitter, fast recovery),” Marcellin explained. “While deployment details vary, many customers are using the PTX as a transport core and then using their IP core routers as an “outer core” to manage IP functionality.”