Being the CIO of a technology vendor is not necessarily an easy job; just ask Bask Iyer, CIO at Juniper Networks.

Iyer is at the center of all the major trends in IT and networking today, including SDN, delivering on the need for BYOD from employees as well as the demand for more cost-effective IT for the business. When it comes to BYOD, one question that all enterprises need to deal with is who actually pays for a device.

“If you’re a salesperson or there is business expense reason for you to use the device, we have a strict approval process for funding the device,” Iyer said. “But if you bring your own device, say an iPad, in addition to what I have already provided, than it is your own expense.” 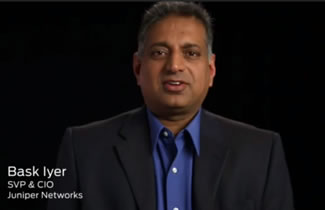 company, but it’s an approach that is headed in the same direction as the company car.

“Companies used to provide cars, then they provided an allowance, and now many companies just say if you need to get to work you drive your own car,” Iyer said.

BYOD does involve cost, though it’s not out of control in Iyer’s view. He commented that IT needs to give employees the tools they need to get their jobs done.

“A lot of time has been wasted by companies in meetings about doing or not doing BYOD and about giving employees a specific version of a device,” Iyer said. “It takes the role of CIO and makes it into a Santa Claus – somebody that gives gifts instead of someone that helps to grow and transform the company.”

The role of CIO also has a lot to do with budgets and the cost of providing IT services.

“Typically the way IT budgets are done is you get X amount of budget and the CIO and IT department put together a business plan with a list of projects,” Iyer said. “Then there is a food fight on which projects get done.”

Iyer considers Juniper to be a lean organization so the food fight is not as difficult as it might be in other companies.

“I do put a business case together and meet with all of the business leaders and we do go and discuss charges but we do it centrally,” Iyer said.

He added that as an engineering company there are always questions about the use of one technology versus another. Overall Iyer stressed that his job is about providing the best technology for the company that provides the best value at the best price.

As a networking company, Iyer doesn’t need to go and find networking gear from other vendors to use, instead he gets to use Juniper’s own technologies.

“Wall to wall we run Juniper gear, running the latest software and all our routers and so on,” Iyer said.

Though he has access to Juniper’s networking technology, Iyer said that he still has to pay for it. In that respect he said that he is paying customer of Juniper and is able to experience both the product and the customer support of the company.

“I’m customer number one and I’m a pain in the neck for those guys,” Iyer said. “I want to showcase how much of a real customer case there could be and hopefully it means the product quality is much higher.”

One of the big pushes from Juniper Networks as a company is the move towards a Software Defined Networking (SDN) infrastructure. It’s a move that Juniper is taking internally as well.

“We have extended our SDKs and written automation so we abstract the networking layers,” Iyer said. “My customers want to know what makes the network more manageable without adding more people.”

Iyer noted that SDN is the next evolution of networking, though he cautioned that devices are still important and not everything can be easily abstracted.

Iyer has been a professional CIO for the bulk of his career. Being the CIO of a technology vendor is particularly challenging in that the CIO is expected to be a technical leader that will take on the PhDs and engineers in the company.

“One of my biggest challenges has been the fact that at a technology company like Juniper, everyone believes that they are the CIO,” Iyer said. “Because everyone has done one part of technology or another.”

Iyer stressed that there is a difference between understanding technology and being the CIO of company.

“The guy that works in the music store might know how to play guitar, but that doesn’t make him Eric Clapton,” Iyer said.