The OpenDaylight project got started in April of this year, promising to be an open source multi-stakeholder effort to build a Software Defined Networking (SDN) platform.

Among those helping to lead the effort is Brocade’s David Meyer, chairman of 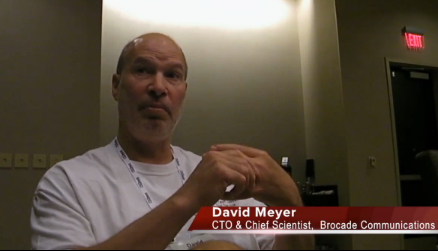 the OpenDaylight Technical Steering Committee (TSC). At his “day job” with Brocade, Meyer holds the titles of CTO and Chief Scientist.

In a video interview with Enterprise Networking Planet, Meyer detailed his involvement with OpenDaylight and what challenges the project faces as it ramps up toward it first major release, codenamed Hydrogen, in early 2014.

Meyer said that, ironically, his role as the chairman of the OpenDaylight Technical Steering Committee is more managerial then technical. He also noted that while he has contributed to many different open source projects over the years, he has never been as deeply embedded within a project as he is with OpenDaylight.

Meyer understands full well how to make an open source community thrive. The keys are committee diversity and a continuous pipeline of contributors moving up through the ranks.

While the term SDN is attached to OpenDaylight, the real goal, from Meyer’s perspective, is a scalable and programmable network.

The fundamental problem in traditional networking is that when a user wants a feature, the user must wait for the vendor to ship that feature. With OpenDaylight, that situation will not exist. Meyer said that if a feature doesn’t exist, an organization can just try to build it themselves instead of being locked into a vendor timetable.

The move to SDN and OpenDaylight also isn’t about entirely abandoning existing approaches to virtual networking. Most enterprises today and for much of the last decade have utlized VLANs as a way to segment network topology. OpenDaylight can encapsulate existing VLANs in a seamless manner that won’t require enterprises to replace existing networks.