Intel is well known for its server and consumer PC chips. Intel is also in the networking business too and is currently developing a new network communications processor that will help to deliver more performance to networking gear.

The new platform is codenamed Crystal Forest and will provide as much as 160 million packets per second of forwarding capacity. Currently, many networking vendors use application-specific integrated circuits (ASIC) in their gear, but Crystal Forest is actually is a bit different.

“Crystal Forest is a combination of a standard Intel CPU and a companion chip, which are both built within Intel’s standard 32nm (nanometer) process,” Stephen Price, director of Marketing at Intel’s Communications Infrastructure Division, told InternetNews.com. “We refer to the companion chip as a communications chipset, similar to an ASIC.”

The Crystal Forest platform also includes software that optimizes the movement and processing of packets on the Intel architecture. Customers can program on the architecture as well as run workloads such as cryptography natively or by taking advantage of the hardware assist on the companion chip. Price noted that no special software tools are required to program the acceleration.

Crystal Forest is intended to be world class for application processing needs such as firewalls and deep packet inspection. Additionally, the system is engineered for control plane usage and packet processing.

“It is being designed into edge routers being deployed in the wide area network (WAN) as well as enterprise routers,” Price said. “Crystal Forest will be a big hit with security appliance and WAN acceleration OEMs.”

A key part of the attractiveness of the Crystal Forest platform for WAN acceleration is a technology called Quick Assist, which helps to accelerate secure packet payloads up to as much as 100 Gbps. 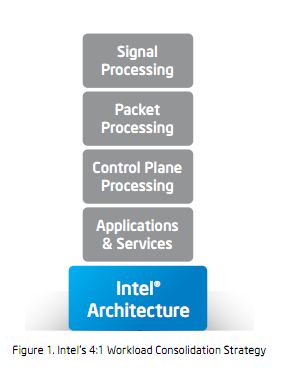 f Crystal Forest for WAN acceleration is the ability to accelerate both compression and encryption without compromising performance,” Price said. “Crystal Forest is designed to run multiple workloads simultaneously resulting in plenty of processing power to not only deal with packet processing, but also support all of control and the rest of the application.”

Crystal Forest can support a wide variety of operating systems, though Price noted that for the targeted market, Linux and FreeBSD are the most popular.

While Intel has made a name for itself with its omnipresent “Intel Inside” branding for its desktop and server chips, that’s not the goal in this market.

“Intel Inside branding is not within the scope of Crystal Forest,” Price said. “At this time it is not being considered.”