The Top Level Domain (TLD) business is now on the verge of its biggest expansion ever as new generic Top Level Domains (gTLDs) are set to debut. Even with the big expansion, demand for existing set of TLDs continues to grow according to VeriSign.

VeriSign’s first quarter 2011  Domain Name Information Brief (DNIB) reports that there are now just over 233 million registered domains on the Internet today, represent growth of 3.3 percent on a sequential basis over the fourth quarter of 2011.

Demand for new domains was particularly strong among Country Code (ccTLD) domains. There are now 94.9 million ccTLDs domains registered up by 16.2 percent on a year over year basis and 4.8 percent sequentially. Part of the reason for the growth in ccTLDs during the quarter was the inclusion of IDN ccTLDs during the quarter. Internationalized Domain Names or IDNs, use non-latin characters. ICANN first approved IDN ccTLDs in 2010.

According to VeriSign, there are now 808,967 IDN ccTLDs that had not previously been counted, that are now part of the total tally for ccTLD registered domains. In terms of ccTLDs there are now 290 ccTLD extensions currently available though the top 10 ccTLDs account for 60 percent of the total number of domain registrations.

The top 10 ccTLDs registries by domain base are: 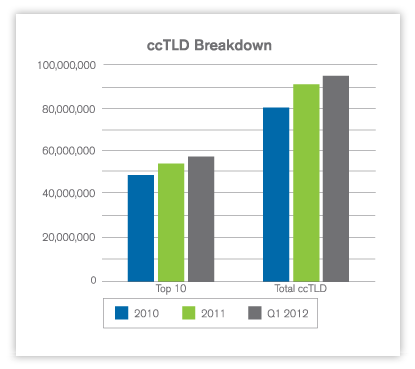 Also growing fast is the .com and .net TLDs, both of which are managed by VeriSign. At the end of the first quarter, VeriSign reported 116.7 million .com and .net domains up by 8.1 percent on a year-over-year basis and 2.5 percent sequentially.

Verisign recently had its .com contract with the ICANN renewed. Verisign will now manage .com until at least 2018. VeriSign has managed .com continuously with 100 percent DNS uptime since 1999.

From a DNS perspective, Verisign also plays a pivotal role managing a number of the Root Zone DNS servers for the Internet. During the first quarter, Verisign’s DNS had a peak query load of 74 billion and an average query load of 66 billion.