IPv6 Launch Day. How Many People Use IPv6?

On June 6th, the world turned on IPv6 access and left it on. World IPv6 Launch Day was a success according to event organizers from the Internet Society and participating organizations but there is still a lot of work left to be done.

In a conference call discussing the event, Leslie Daigle, CTO of the Internet Society said that now IPv6 is for real.

“Where we are now as opposed to where we were 48 hours ago is that the Internet now functions with IPv6 as part of its regular operation, Daigle said. “We feel comfortable saying that IPv6 is the new normal. But this really is just beginning.”

Over 60 access providers and more than 3,000 websites publicly participated in the Launch event. Those participants have all committed to keeping IPv6 running as part of normal business operations. 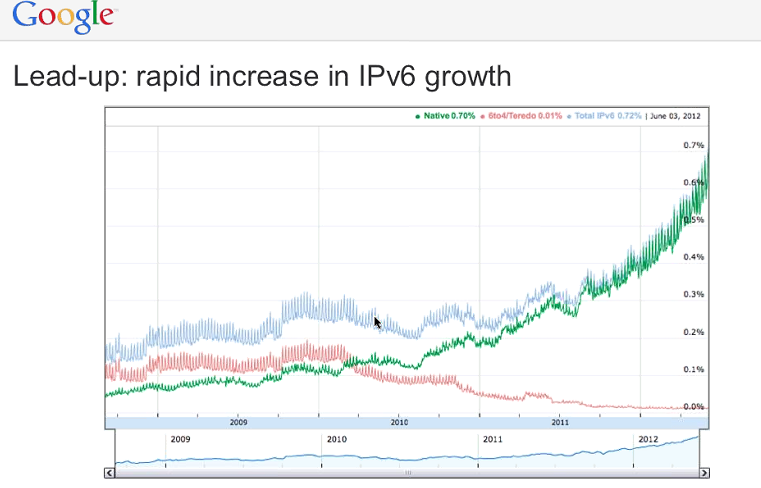 In terms of IPv6 traffic, that also is now beginning to grow, though it’s still currently standing at approximately 1 percent of all Internet traffic. According to Google Engineer Erik Kline, there has been a rapid growth of IPv6 at Goggle. For Google, IPv6 traffic has grown by 150 percent in the last year.

“At this rate, approximately 50 percent of users will have IPv6 in six years,” Kline said.

Comcast’s John Brzozowski, Distinguished Engineer and Chief Architect for IPv6 said that on his network there was a 3.75 percent increase in IPv6 traffic compared to World IPv6 Day in 2011.

“That’s a number that is three to five times what it was on World IPv6 Day, twelve months ago,” Lee said.

For Content Delivery Network Akamai, the IPv6 traffic growth has been even great.

“The amount of traffic we have over IPv6 is a function of how many customers we have that have content available over IPv6 as well as how many end-users there are,”Eric Nygren, Chief Systems Architect at Akamai said. “We’ve seen both of those go up such that the amount of traffic, we’re serving over IPv6 this year is over 100 times as much as we were serving during World IPv6 Day last year.”

The message that Vint Cerf, Internet luminary and evangelist at Google stressed is that IPv6 is ready. Cerf said that the core design for IPv6 was done over 20 years ago and it has taken this long for it to get launched. At this point, thanks to the World IPv6 Launch event and the participation and enablement of carriers, end points and websites, Cerf is anticipating faster growth.

One of the ways he expects growth to occur among the laggards is by way of public embarrassment. With the biggest websites and service providers in the world now enabling IPv6 all the time by default, Cerf expect that those that aren’t IPv6 enabled will be embarrassed if they are not IPv6. Additionally as increasing numbers of end points attempt to join the network, there is an obvious need for IPv6 access and services and that will further drive adoption.

At this point, Cert was adamant that the time for IPv6 is now here.

“There are no more excuses, you have to be able to run IPv6 all the time and anytime cause this won’t get turned off,” Cerf said. “For any ISP, if you aren’t capable of running IPv6, you’re on notice. Get going. Get IPv6 running.”