The last two years have been tough ones for employee turnover at Cisco, with top execs, engineers and others all leaving the company voluntarily, while others are slowly being pushed out in staff reductions. The latest big name to leave Cisco is Rob Soderbery, who used to run Cisco’s switching business.

The first time I met Soderbery in person was in 2013, when he presided over the most unique keynote I have ever seen at the Interop conference in 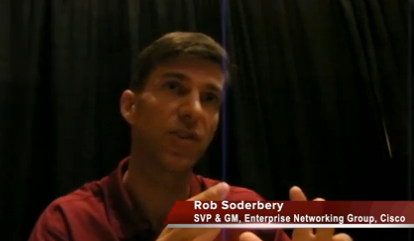 Las Vegas. Soderbery is a bit taller than I am, some might say he’s as tall as a basketball player. At the 2013 Interop event, Cisco used its keynote investment to set up a basketball hoop on stage as Soderbery played 1-on-1 with Kyrie Irving (yeah, the same Kyrie Irving who just won an NBA championship in Cleveland).

That same year I did a 1-on-1 video interview with Soderbery about Cisco’s biggest switching product (by revenue at the time) – the Catalyst.

Times have changed at Cisco since 2013, with a new CEO, CTO and a direction that is focused on the cloud. For Soderbery, the magic number seven is the only clue that he is publicly providing as to why he is leaving Cisco now. Soderbery has now been at Cisco for seven years.

“Seven has always been the magic number in my career – after 7 years, new callings beckon, new adventures to be sought,” Soderbery wrote in a blog post. “It is a sufficient time to make a contribution of significance, while not so long that you forget how to do new things. And thus it is again as I depart from Cisco.”

Frankly, I’m not to surprised at Soderbery’s departure – 7 years not withstanding. At recent media events, Soderbery’s presence has been muted, with Cisco’s new CTO and others taking center stage, including David Goeckeler, SVP and GM of Security and Networking at Cisco, leading the way.

In any event, best of success to you, Rob – hope you get to shoot hoops with an NBA superstar again one day.

Sean Michael Kerner
Previous article
All Roads Lead to 100 Gbps Ethernet
Next article
SDN: The Network Piece of the SDDC