Cisco is expanding its data center networking portfolio with a series of new technologies that enables the new world of the software defined data center.

Cisco’s goal is to have a networking fabric that ties data centers and the cloud together. To that end, Cisco is expanding on the vision of the Cisco ONE strategy with hardware and software. Cisco ONE is Cisco’s Open Network Environment and is a Software Defined Networking (SDN) approach that Cisco first started to talk about in June of 2012.

On the hardware front, Cisco is announcing the new Nexus 6000 switch family, which will now offer the 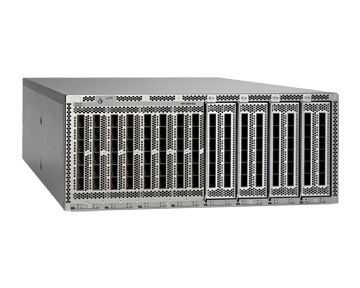 According to Cisco, the Nexus 6000 can support up to 75,000 virtual machines on a single switch. The Nexus 6000 switch is powered by new ASIC silicon technology that Cisco has custom developed for the platform. The top end Nexus 6004 chassis can support up to 384 ports of 10 GbE or 96 port of 40 GbE in a 4RU configuration.

The Nexus 6000 is the latest evolution of the Nexus product line that first debuted in 2008 with the Nexus 7000 as Cisco’s next generation data center switching platform.

At the virtualization layer, Cisco is introducing the new Nexus 1000V Intercloud switch.

“This is a hybrid cloud technology that allows customer to extend their data center capabilities in a secure manner into a provider public cloud,” Yen explained.

With the intercloud switch a data center could burst to the public cloud if needed to meet demand requirements. Going beyond just providing a switch than can tunnel an app to work into a public cloud, Cisco is also encapsulating the entire virtual network infrastructure and services into a container.

The container has security wrappers around it so as to protect the workload from other jobs that are also running in multi-tenant public cloud environments. Yen added that on the enterprise side Cisco is adding a technology called the virtual network management controller to extend enterprise network management and policies to the cloud.

Software Defined Networking (SDN) is all about abstracting the capabilities of the network from the networking hardware itself. The OpenFlow protocol is a core approach to enabling SDN and it relies on the use of OpenFlow enabled switches and then a controller to manage the flows.

Cisco is expanding on the OpenFlow approach with its new Cisco ONE Software Controller. Yen explained that the Cisco ONE controller is able to support Cisco’s onePK (ONE Platform Kit) for enabling SDN as well as OpenFlow.

While there are a number of open source OpenFlow controller in the market, Yen noted that the Cisco controller was built in-house by Cisco engineers over the last two years. Other networking vendors including Juniper and HP are currently also engaged in building out SDN controller technologies. In Juniper’s case, the technology is being jumpstarted by the $176 million acquisition of Contrail Systemsat the end of 2012.

Yen described Cisco’s onePK as a super-set of capabilities offered by OpenFlow. OpenFlow is rapidly becoming a public standard with industry standard interfaces that are being embraced by multiple vendors. In Yen’s view the full onePK suite offers broader capabilities than OpenFlow can on its’ own.

Sashi Kiran, Senior Director, Data Center Marketing at Cisco explained to EnterpriseNetworkingPlanetthat from a Cisco perspective onePK is able to better abstract the intelligence that is available on Cisco switches. He stressed that it all depends on what customers want to do.

“When you have a consortium working on a standard you always get forced into a least common denominator situation,” Yen said. “Not all of the capabilities available on Cisco ASICs will be covered by OpenFlow and that’s what we’re providing with onePK.”

From an OpenFlow perspective, Cisco’s ONE Controller will also be able to control SDN across non-Cisco, OpenFlow enabled switched. While Cisco is not initially planning on specficially testing and providing verification against other networking vendors’ OpenFlow switches, Yen stressed that the intent is to be interoperable.