When it comes to software defined networking (SDN), platforms capable of supporting multi-vendor environments may be the most practical bet for many organizations. Fewer necessary changes to existing infrastructure mean lower CapEx and a greatly reduced chance of getting locked into—or locked out of—specific vendors. In recognition of that fact, service provider SDN vendor Cyan today announced that its Blue Planet SDN technologies will support a number of Cisco and Juniper routing and switching platforms.

“Up to this point in time, Blue Planet has largely been multi-vendor and provided WAN automation, management, and provisioning in a multi-vendor environment, but a lot of the equipment we’ve supported has been downstream Ethernet,” Joe Cumello, Cyan CMO, explained, naming Overture and Accedian as examples of vendors already supported by Blue Planet. But customers are demanding “a way to provide one operational interface across their networks, instead of multiple interfaces like they have today,” he said, a key driver in the integration of the additional hardware. Additionally, Cyan has developed an internal tool to speed up the process. The Cisco and Juniper devices were integrated into Blue Planet within four weeks, Cumello told me. This has implications for Cyan’s multi-vendor strategy, as the company will be able to rapidly add support for more devices in the future.

Cyan Director of Software Innovations Nirav Modi gave me a brief tour of Blue Planet. From its position above a multi-vendor, multi-layer physical network, the Blue Planet platform uses “Element Adapters” and a range of standard protocols, including NETCONF, SNMP, OpenFlow, TLI, and CLI, to onboard new network elements and talk to the network. On top of the Blue Planet platform, meanwhile, open APIs and Blue Planet apps like Planet Orchestrate for service orchestration, Planet View for monitoring and SLA assurance, and Planet Operate for controller, management, and visualization functionality interface with the customer OSS and business apps.

Among Planet Operate’s key features is its ability to provide 3D visualization of the network down to the port level. Initial discovery of a supported network device yields specifics including all nodes, connections, IP address, and even software version and serial number, easing future management and troubleshooting. 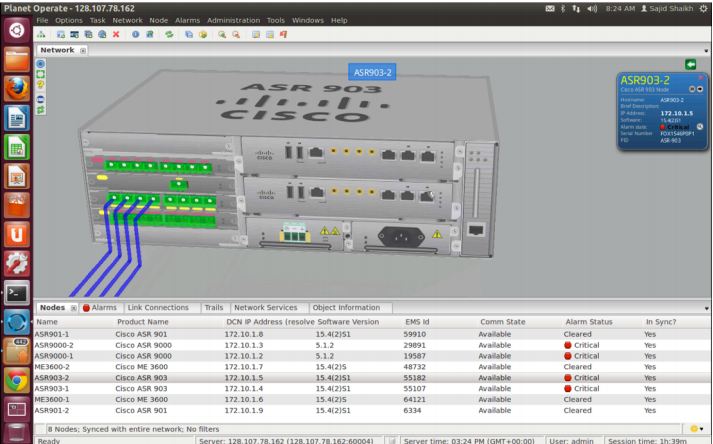 Planet Operate’s multi-layer 3D visualization, meanwhile, provides a zoomed-out view of the network for quick understanding of device and service relationships. Services can be quickly configured and provisioned in drag-and-drop fashion and information collected down to whatever level administrators require, with data collection customizable using the interfaces to which they are accustomed. 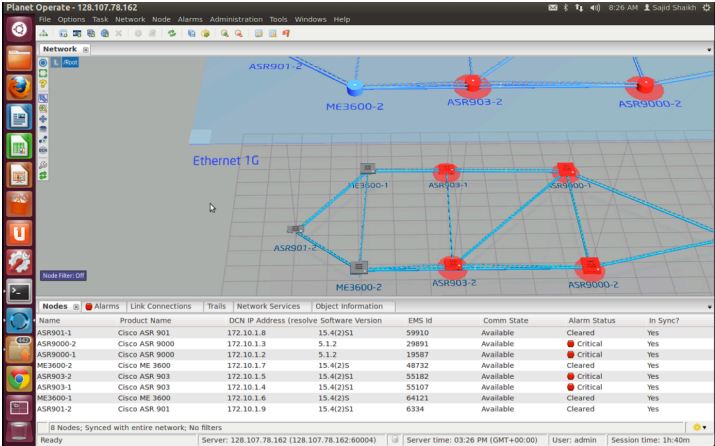 “It’s a far cry from how service operators do it now, which is swivel chair from hop to hop to hop and then back again to make sure everything’s working right,” Modi said.

Service operators are one thing, but what about the enterprise? Considering how long SDN has dominated the enterprise networking conversation, production deployments have remained limited. Only a small percentage of businesses have actually deployed or even made plans to deploy SDN, according to SDN adoption research conducted by Enterprise Networking Planet parent company QuinStreet. For most organizations outside the hyperscale cloud providers and the telco space, SDN adoption plans remain in the “tire-kicking” stage, as Gartner Research Director Andrew Lerner described in a blog post earlier this year.

One of the reasons for that may be enterprise concerns over infrastructure disruption. Some organizations simply don’t have the budget for an all-out, single-vendor SDN setup, but despite its relative cheapness, whitebox hardware may not be much more attractive, for reasons such as perceived reliability or security. The middle ground that vendors like Cyan tread makes more sense for businesses hoping to leverage the benefits of SDN atop what they already have.

And Cyan is confident that it will be able to make its case to the enterprise. The vendor recently began hiring enterprise sales personnel with an eye toward targeting the financial and Web 2.0 verticals, Cumello told me, “because those companies tend to operate their own networks, and when you start dealing with enterprises that build their own networks, the benefits of this SDN functionality become very real.”

“It’s a new market for us,” Cumello said. The jury is still out on whether another entrant into the enterprise SDN space will impact the overall adoption numbers, but the lure of ten-figure analyst predictions for the software defined networking market in coming years is simply too strong to resist.