For the fourth quarter of 2012, F5 reported revenue of $362.6 million which is a 15 percent year-over-year gain. All told for the full fiscal 2012 year, F5 reported revenue growth of 20 percent with revenues totaling $1.38 billion. Looking forward the company remains optimistic, providing first quarter fiscal 2013 guidance for revenue in the range of 363 million to 370 million.

“During the next two quarters, we will be delivering our largest appliance refresh in four years,” F5 CEO, John McAdam said during the company’s earnings call. “Our next release of TMOS includes a number of new security and service provider offerings as well as products to enable cloud architectures.”

TMOS is the core operating system that powers F5’s lineup of BIG-IP and Viprion application delivery controllers(ADCs). The new TMOS update will be going beyond traditional ADC capability and is set to integrate what McAdam referred to as, the industry’s first application delivery firewall (ADF). The new ADF will include Level 3 through 7 security as well as data loss prevention technology.

Firewall technology is not something that is entirely new to F5. At the beginning of 2012, F5 announced that it’s lineup of ADCs were certified by testing vendor ICSA for being usable as firewalls.

Manny Rivelo, Executive Vice President of Security and Strategic Solutions at F5 noted that putting a load balancer inside a firewall is a complicated issue.

“You have to have the right platforms and the foundation and what we’ve done is, we’ve built the right platform starting with some availability services and we’ve put services in it, so we think we have a leadership position,” Rivelo said. “The data will prove that out when we announce it later in this year.”

The new TMOS update will be complemented by a virtualization and hardware updates as well. 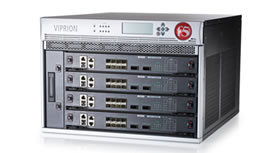 “We will also be delivering the industry’s broadest range of Hyper-V support of world-class performance levels,” McAdam said.

From a hardware perspective, F5 will also be announcing new platforms that extend the company’s current product families. One of the new platforms is an eight-slot version of the VIPRION. The eight-slot VIPRION is set to double the performance of VIPRION 4480, that was first announced in April of this year. The VIPRION 4480 can deliver up to 320 Gbps of Layer 4 throughput.

“The pipeline for these products is building steadily and we’re seeing a fairly large uptake in RFP and proof-of-concept request,” McAdam said. “F5 has the opportunity to be a leader in this area which will not only provide growth opportunities over the next three years, but should also significantly enhance our position as a strategic supplier to global service providers. “