While some segments of the economy are improving, the global market for data center network equipment is slowing.

“Following two strong years of investment, growth in the data center equipment market is starting to slow,” Matthias Machowinski, directing analyst for enterprise networks and video at Infonetics Research, said in a statement. “While the near-term outlook remains positive, ultimately we think the market is headed for a peak as data center operators improve infrastructure utilization and adoption of cloud services moves 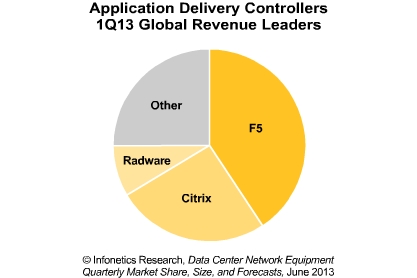 The ADC market is shifting somewhat, thanks in part to Cisco’s exit from the space. Cisco has now partnered with Citrix for ADC capabilities, which gave Citrix a boost to become number two in the market. Overall, Infonetics has F5 holding down the top spot in the ADC market. F5’s CEO stated during his company’s earnings call that Cisco’s ADC exit helped his business.

The top four networking-related initiatives identified by the Infonetics survey were security, cloud, virtualization, and cost-related activities. The survey found a disconnect between enterprise budgets and network usage as organizations try to contain costs.

“Vendors who can solve this challenge are best positioned to take share in this $27-billion-a-year market,” Machowinski added.