Midokura CEO on OpenStack, SDN, and the Future of Network Virtualization [VIDEO]

Japanese startup Midokura launched its vision of Software Defined Networking (SDN) in the U.S. back in October of 2012.

It’s a vision that looks beyond OpenFlow with an overlay networking approach called MidoNet. MidoNet structures the network logically, as one large virtual grid router.

Midokura raised $17.3 million in Series A funding in April and announced that CTO Dan Mihai Dumitriu was taking over the CEO role. In an exclusive interview at the recent OpenStack Summit, Dumitriu told Enterprise Networking Planet what makes his company different and where it might be headed.

Dumitriu noted that MidoNet uses an overlay approach to provide multi-tenant isolation. That isolation can be integrated in an OpenStack cloud environment by way of the Quantum networking API.

Quantum is the core networking project in OpenStack and a key part of the recent OpenStack Grizzly release. OpenStack is a multi-stakeholder open source cloud platform effort with big-name backers, including IBM, HP, Dell, Intel, AT&T, Comcast, and Cisco, among others.

Part of the Quantum API enables security groups for cloud deployments. Dumitriu explained that security group information is sent though a REST API to MidoNet and then pushed out to agents at the edge of the network. 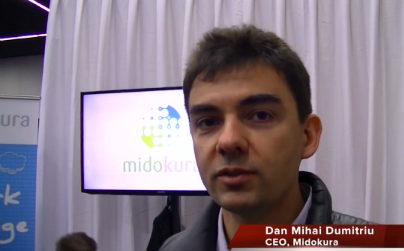 While security groups in OpenStack provide for a degree of control, they do not provide full firewall-type capabilities. Part of the discussion for the next major release of OpenStack Quantum is for service insertion capabilities. Those services could include some manner of Firewall as a Service (FaaS) capability.

One of the biggest things to happen to the SDN world in recent weeks was the official creation of the OpenDaylight project.

OpenDaylight is an open source effort coordinated by the Linux Foundation and supported by many large networking vendors, including Brocade, Cisco, Citrix, Dell, Ericsson, Fujitsu, HP, IBM, Intel, Juniper Networks, and VMware. Midokura is not currently part of the OpenDaylight effort.

Dumitriu said that he’s just watching and waiting to see what happens with OpenDaylight. In his opinion, it’s not clear what direction the project will take. Much of the early discussion in the project so far has been about SDN controller technology.

As adoption grows, explaining what the new world of virtual networking is all about has become easier for Dumitriu and his company. That’s not to say there aren’t a few challenges.

He noted that education in the market is confused by messages from different vendors.

“Not everyone believes in the overlay approach, to be honest,” Dumitrui said. “Overlays and VPNs are not new. It’s just that they haven’t been applied in this context within the data center.”

With $17.3 million in funding, Dumitrui stressed that he will remain conservative in spending and not go all out on marketing and sales. Midokura currently has 27 employees: 16 in Tokyo, 6 in Barcelona, and 5 in the U.S.

Dumitrui said that customers are demanding more complete solutions, and that’s what Midokura is currently building.

“Right now we handle Layer 2 through Layer 4. They definitely want more than that,” Dumitriu said. “So we’re taking steps to build services that they want on top of the MidoNet platform.”

Looking beyond virtual networking control, Dumitriu also sees a need for some degree of physical control in OpenStack Quantum.

“I think it would be a good idea if we could incorporate features for the operators to be able to manage the physical IP fabric as well,” he said.

Watch the video interview with Dan Mihai Dumitriu below:

Sean Michael Kerner is a senior editor at EnterpriseNetworkingPlanet and InternetNews.com, the news service of the IT Business Edge Network, the network for technology professionals. Follow him on Twitter @TechJournalist.