A lot has changed in the five and a half years that Nuage Networks has been in business. Now Nuage is aiming to alter the market further with the launch of its SD-WAN 2.0 offering.

Nuage Networks got started in April 2013 as a division of Alcatel-Lucent, with the goal of enabling software-defined networking (SDN). The core platform at the time was the Virtualized Service Platform (VSP). Alcatel-Lucent no longer exists, and VSP is now in the rearview mirror for Nuage. Nokia acquired Alcatel-Lucent in 2016 for $16.6 billion, and along with it, Nuage.

The new Nuage Networks Virtualized Network Services (VNS) platform announced on Sept. 19 comes with a new vision for Nuage and a focus on enabling what the company is referring to as SD-WAN 2.0.

“The industry is on the cusp of a big shift towards SD-WAN,” Sunil Khandekar, founder and CEO of Nuage Networks, stated. “Today, Nuage solidifies its SD-WAN 2.0 leadership, adding key features to improve the security and manageability of VNS, and further reinforces our founding vision to connect enterprise users to their applications without boundaries.”

The basic concept of first-generation SD-WAN technologies was to enable organizations to aggregate multiple public Internet links to create a reliable WAN, without the high cost of existing WAN technologies like MPLS.

In a launch event for SD-WAN 2.0, Khandekar explained that the first generation of SD-WAN was focused on IP service connectivity. He noted that, in his view, SD-WAN really should be about IT services over an IP network.

“We can have a unified networking and security solution that’s fully automated, and that’s what we are calling SD-WAN 2.0,” Khandekar said. “SD-WAN 2.0 is really about aligning the needs of enterprises, which are multi-cloud, value-added services and security.”

The market for SD-WAN technology is a healthy one, generating $162 million in revenue during the first quarter of 2018 alone, according IHS Markit.

“As SD-WAN continues to accelerate to mass adoption, enterprises need to centralize policies and automation to increase simplicity while reducing operations of the services IT delivers to the line of the business unit,” Ray Mota, CEO and Principal Analyst at ACG Research, commented. “Nuage Networks’ SD-WAN is the next logical step in consolidating the value of automation across DC, WAN and public cloud.” 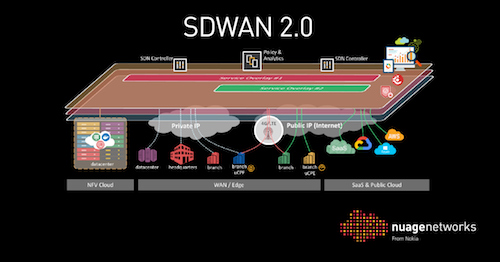 Sean Michael Kerner is a senior editor at EnterpriseNetworking Planet and InternetNews.com. Follow him on Twitter @TechJournalist.