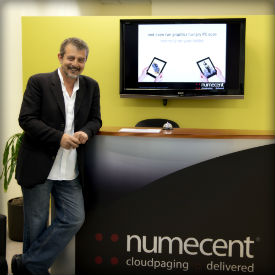 based startup Numecent has launched a “Native as a Service” (NaaS) platform that may fundamentally change the way native applications are delivered. I recently spoke with Numecent CEO Osman Kent, who previously co-founded and served as CEO of 3Dlabs, about NaaS’s implications for independent software vendors (ISVs), telcos, managed service providers (MSP), and enterprises alike.

The NaaS platform originated in Numecent’s industry-acclaimed “cloudpaging” application virtualization and streaming technology. Cloudpaging delivers small fragments—”pages”—of pre-virtualized software instructions from “cloudified” applications to the end user machines that execute them. NaaS allows Windows-native applications to be “put into the sausage machine, and a few hours later, the cloudified version emerges” without any access or changes to the underlying source code or need for further engineering, Kent explained.  After cloudification and, if desired, license virtualization, cloudified apps are ready for delivery. Numecent hosts apps in its multi-tenant public AWS cloud, but customers who want to use their own IT infrastructure have a self-hosting option as well.

Cloudpaged applications look and run like locally installed programs, complete with icons in users’ Windows Start menus and customary file associations. Performance is comparable to local applications and improves over time, leading to increased perceived network performance, Kent told me. He credited this to Numecent’s predictive engine, which analyzes usage data to statistically infer the relationships between page requests and heuristically pushes pages when they are likely to be needed. 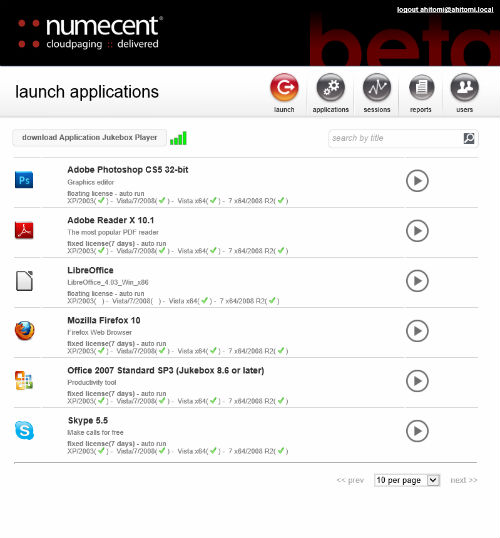 Cloudpaging “solves almost all the problems typical to native applications,” Kent said. Those problems include long download and installation times, cumbersome licensing systems that reduce or preclude the portability of applications, and large IT support footprints. Cloudpaging also solves typical web-app challenges such as limited feature sets, slow or unstable performance, and the security concerns around storing data in the cloud. For large enterprises in particular, the way cloudpaging addresses those concerns may make the technology especially appealing. Unlike traditional web applications, cloudpaged applications do not move users’ data to the cloud.

During our interview, Kent gave me a demonstration of how NaaS handles data. He launched and ran a cloudpaged version of Adobe Photoshop, which, incidentally, launched in under 30 seconds and ran smoothly. Kent created a file and saved it. He then removed Photoshop from the list of eligible applications enabled for his machine. When Photoshop went, so did the file he’d created; were he or another administrator to re-enable Photoshop on his device, the file would reappear as well.

NaaS makes this possible by optionally sandboxing the data using a technology Kent referred to as “data virtualization.” Files created in cloudpaged applications simply cannot be accessed without the correct application enabled, let alone dragged and dropped to a USB stick or other data security risk. For enterprises concerned about data confidentiality in BYOD scenarios, this should make NaaS an attractive proposition.

And what about NaaS’s impact on the network? Well, Numecent’s telco customers love cloudpaging, Kent told me, “because we can reduce network usage by about 95 percent.” Cloudpaging reduces application download sizes to anywhere from one twentieth of the original file size to one hundredth by delivering only on-demand portions of applications. Pages are only fetched once, and once users establish usage patterns, network use diminishes even more, according to company documents.

Numecent’s current strategy focuses on the telco vertical and on ISVs looking for a way to rapidly deploy their Windows-native applications as cloud offerings. Moving forward, however, the company is developing cloudification for Linux and Android platforms as well.

Along with Linux and Android development, Numecent also has additional data virtualization and sandboxing technology in the works, along with “cloudbursting” between self-hosted and public cloud versions of NaaS, on-premises NaaS server instances for enterprise deployment, and additional NaaS solutions tailored for MSPs, telcos, and the enterprise.

Since coming out of stealth in 2012, Numecent has received a fairly large share of industry hype, and cloudpaging, cloudification, and NaaS appear equipped solve many of the issues of locally installed and cloud-based applications. Although the company’s roots are in on-premises enterprise deployments, Numecent has not yet announced a specific enterprise strategy with NaaS, but if all goes well with its telco and ISV markets, the rest looks poised to fall into place. Enterprises who have so far held back from the cloud, take notice.

Jude Chao
Previous article
Back to Basics: Five Steps to Handling Any Network Crisis
Next article
Why Virtualize the Network?