Every new technology is fueled by a vision, a new world of future possibilities that can’t even be imagined if things stay the same as they are now. The trouble is that these visions tend to gloss over the often painful and convoluted process of getting from here to there.

This is where we’re at with software defined networking (SDN). On the surface, it is hard to argue against the digital nirvana on offer: on-demand provisioning, automated load balancing, streamlined physical infrastructure and, best of all, the ability to scale network resources in lockstep with application and data needs. Coupled with the ongoing virtualization of servers and storage, SDN ushers in no less than the completely virtualized data center, where end-to-end compute environments will be deployed and decommissioned on a whim.

Unfortunately, legacy network infrastructure – primarily a mixed bag of vendor, platform and protocol solutions, each initially deployed in response to short-term challenges  – makes reaching the ultimate goal of an integrated, orchestrated network ecosystem a long, difficult process for many organizations. At best, we can take comfort in the fact that it is certainly feasible, though perhaps not optimal, to implement SDN on existing physical infrastructure.

“In terms of the physical layer, I don’t think SDN deployment will be a big issue,” said Alex Henthorn-Iwane, vice president of marketing at QualiSystems, an IT infrastructure automation solutions provider. “The fundamental hardware connections – wires and fibers, closets, floor structure, backbones – those will stay the same. But when you start thinking about applying SDN to heterogeneous networks, several major issues arise.”

Topping the list, of course, is the wildly disparate array of network devices, which must all be brought to heel to redesign the system with any semblance of order. Essentially, there are two ways of doing this: rip and replace virtually all network devices in favor of a homogenized infrastructure – either a single-vendor solution or through a common protocol like OpenFlow – or build an overlay network, in which an SDN-enabled controller communicates with legacy infrastructure through existing protocols like SNMP or BGP.

Naturally, this approach is a bit more complex than a single, overarching SDN solution, but it does have the advantage of bringing flexibility to legacy infrastructure fairly quickly. Juniper, for instance, offers an open source version of its Contrail controller, called OpenContrail, under the Apache license so it can be easily downloaded for virtual overlay applications. In this way, the enterprise can implement the rudimentary functions of a software defined network without even employing the OpenFlow protocol. 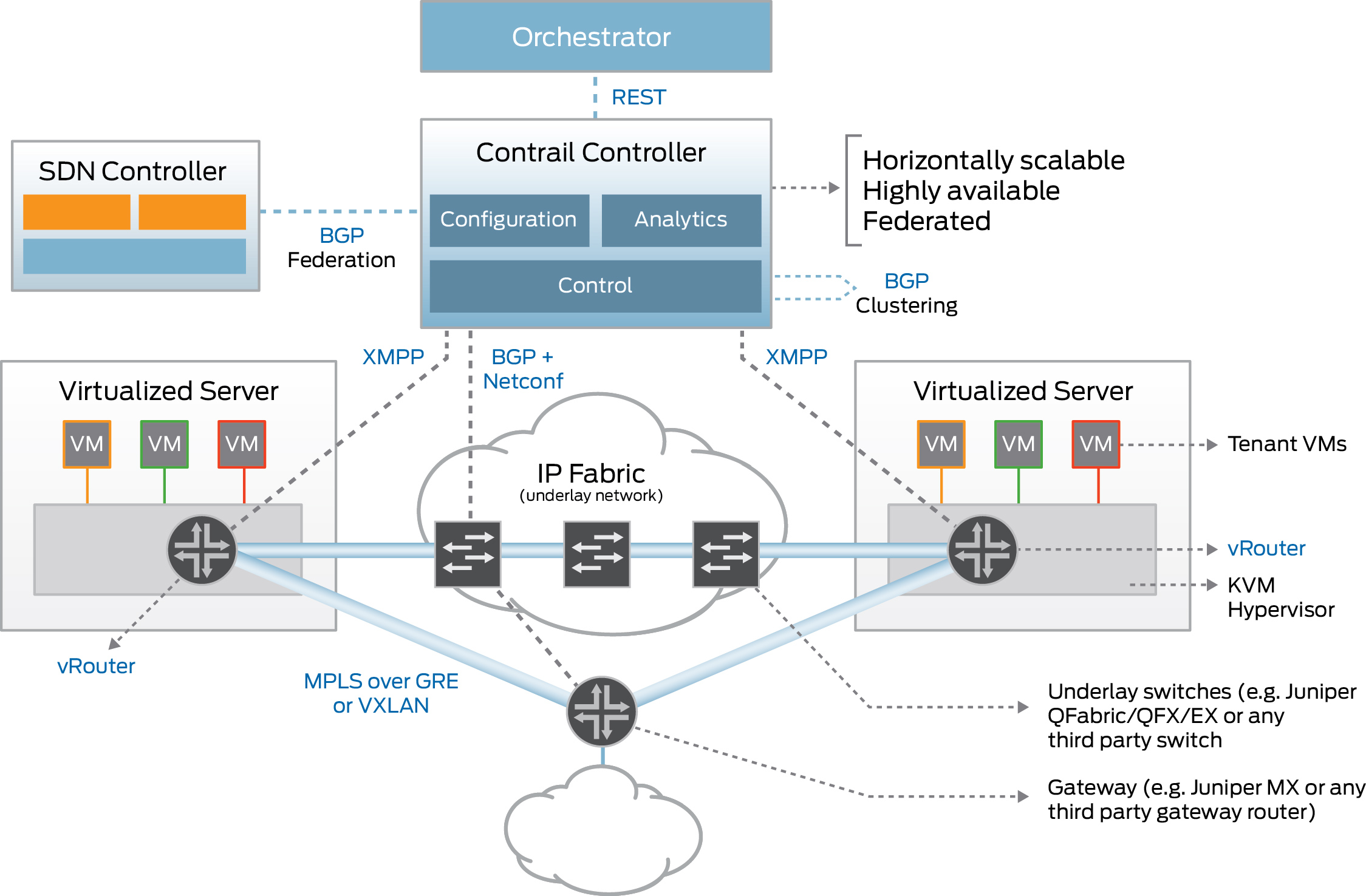 “Our controller uses XMPP to talk the virtual router, Contrail vRouter for the virtual switch, BGP for the control plane and other IETF protocols for physical infrastructure support,” said Aruna Ravichandran, Juniper’s vice president of marketing and strategy for software and SDN. “As long as the controller is built on open standards, there is no need to rip and replace the entire network.”

Ravichandran was quick to point out, however, that most large customers are more interested in building new SDN infrastructure from the ground up, primarily through converged, modular infrastructure devoted almost exclusively to cloud architectures. This is where Juniper’s new MetaFabric solution enters the picture. MetaFabric can act as the guiding principle for switching, routing, security, SDN and anything else that requires the support of an agile, dynamic network environment. In these instances, implementing SDN on legacy infrastructure becomes primarily a means to leverage that infrastructure for the new computing paradigm, rather than to build the new virtual data environment on the framework of the old.

This could emerge as a crucial distinction as SDN strategies crystallize over the coming year, since not everyone is convinced that deploying a simple overlay network on legacy infrastructure is a good idea. Cisco, for one, has made no secret of the fact that it views SDN as one piece of a broad network overhaul that will take years to complete, and that will require a range of hardware, software and service layer changes.

“If you look at any one technology and ask if that is the answer that takes you to this magical world, the answer is no,” said Phil Casini, director of product management at Cisco. “You could start with tunneling technology, and then the branch becomes problematic through the LAN. In this case, you have a short-term gain that turns into a long-term liability. The practical reality is that the enterprise is here with the networks they have built over the years, and these need to migrate at the component level, the fabric level and the policy level.”

This practical reality was the primary motivation behind Cisco’s acquisition of Insieme, recently relaunched as the heart of the company’s Application Centric Infrastructure (ACI) platform. As Frank D’Agostino, senior director at Insieme, noted, simply automating the configuration of a network overlay does not even come close to the full capabilities of a top-to-bottom SDN infrastructure.

“Other than the application owners themselves, the network team is only one to touch every end of that application,” he said. “The real value of SDN is to have visibility into that app wherever it goes, but you don’t get that with a network-based implementation where the physical network is simply recreated in a tunnel. So the real use case here is the benefits to the application tier that are relevant to the business, not the ability to recreate the network VLAN in software because, frankly, that won’t exist anymore.”

But if SDN will only provide optimal results under a revamped network infrastructure, how can enterprises struggling to control costs justify the full turnover of virtually all networking elements within the next few years? While server and storage infrastructure presented their fair share of challenges during the virtualization transition, networking is in an entirely different league by virtue of its sprawling, often convoluted footprint and the fact that most network devices have a relatively long lifecycle. These factors put even more pressure on CIOs to maximize ROI before swapping them out. And how much will this process disrupt current operations?

At best, it seems we are in a classic development pause, in which the new technology has been introduced and now the challenge is to figure out the best way forward.

“The basics of technology architecture deployment still apply [with SDN] – things like due diligence, assessing the true cost of ownership,” said QualiSystem’s Alex-Henthorn. “But it’s not just about speeds and feeds anymore. The good news is that the cloud and virtualization have brought concepts of system development and agile operations forward, and this sort of thinking needs to be applied to the network.”

Legacy networking infrastructure, then, will have a role to play in the SDN future, but it isn’t likely to provide the foundation – at least in its present form – for the truly agile network architecture that enterprises say they need to maintain a competitive edge.