The race to get Wi-Fi 6 hardware to market is continuing to accelerate, with Cisco announcing its entry into the emerging space.

Wi-Fi 6 was formerly known as the 802.11ax Wi-Fi standard and offers the promise of faster connectivity than the current 802.11ac standard that is already widely deployed by Cisco and other networking vendors. Among the benefits of Wi-Fi 6 are increased data rates, reduced latency, higher density and improved power efficiency over existing Wi-Fi access points.

“Every leap in connectivity enables the next wave of profound innovation. 5G and Wi-Fi 6 represent a new era of connectivity,” David Goeckeler, EVP and General Manager, Networking and Security Business at Cisco said. “Developers are already creating the next generation of wireless-first, immersive experiences. With billions of things connecting to the network, this growth will create unprecedented complexity for IT.”

In contrast the 9120 is a mission critical Wi-Fi 6 AP that integrates Cisco’s RF ASIC chip which provides the next generation of CleanAir functionality. Cisco has been deploying its’ CleanAir technology in APs since at least 2010, providing organizations with a capability to detect and route around wireless interference.

All of the new Catalyst APs also integrate the next generation Bluetooth 5 standard, which is important for enabling connectivity with certain types of Internet of Things (IoT) devices. 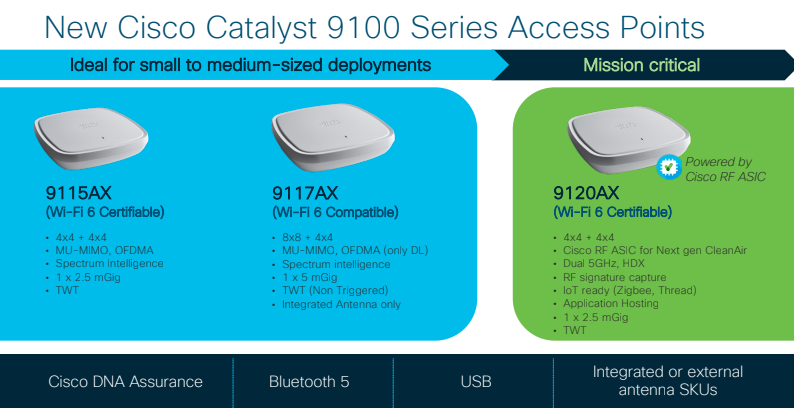 With Wi-Fi 6 there is a need for more backend switching capacity infrastructure, which is a need that Cisco is looking to meet with its new Catalyst 9600 series switches.

The Catalyst 9600 can support up to 25.6 Tbps of wired switching capacity in a single chassis. In terms of ports, the modular system can support up to 48 ports of 100 Gigabit Ethernet and 192 25/10 Gigabit Ethernet ports. The Catalyst 9600 plugs into Cisco Digital Network Architecture (DNA) to enable a Software-Defined Access (SD-Access) approach for agile networking delivery.

“The new Catalyst 9600 modular core switch addresses the demands of Wi-Fi 6, mGig speeds, and security in a cloud-driven world,” said Sachin Gupta Senior Vice President, Product Management at Cisco Enterprise Networking. “This switch will serve as a foundation for the next generation of multi-domain, Intent Based Networks, and will allow customers to create a wireless-first network built as a single fabric for wired and wireless.”