Cisco Beefs Up Switching with Catalyst 6800

The Catalyst 6800 isn’t just any new switch, though. It’s an extension of Cisco’s popular Catalyst 6500 platform, one of the most widely deployed switching platforms in the history of computing. According to Cisco, there are over 800,000 Catalyst 6500s in its deployment base.

“The Catalyst 6800 is the 6500 on steroids,” Inbar Lasser-Raab, senior director of marketing for enterprise networking at Cisco, told Enterprise Networking Planet.

The Catalyst 6800 platform benefits from a new chassis design and includes updated silcon. The ASIC is EARL8, which the Nexus 7K platform also uses. This ASIC is optimized for scalable core deployments with rich services and will offer programmability with Cisco’s Software Defined Networking efforts, including onePK and OpenFlow.

“As our customers move up, they will want to re-use the investment they have made in the Catalyst 6500,” Lasser-Raab said. “Typically, Catalyst 6500 customers really love the platform, but some might need more capacity and more 10 Gigabit Ethernet density. That’s what the 6800 is for.” 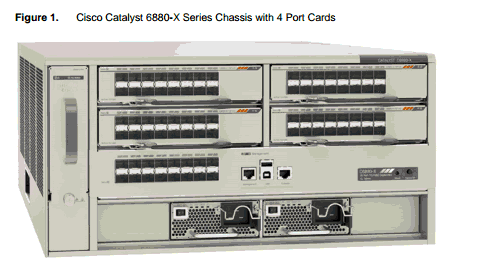 “The 6880-IA is an access switch that an enterprise would deploy to connect different equipment across different floors in a building,” Lasser-Raab said. “The access switches are then connected back into the core switch.”

The special thing about the 6880ia is that when it is connected into a Catalyst 6500 or 6800, the switch can be auto-configured by the core switch and benefit from the same core capabilities.

“It’s a distributed system that behaves like a single switch in terms of management and configuration,” Lasser-Raab said. “That really helps to simplify all the operational activities in a campus.”