The big difference between the 5400 series and its predecessor series is the “R,” which HP says stands for
resiliency. HP has been in the market with various 5400 series switches since at least 2006. The first 5400 zl series switches were opened up as a network blade platform back in 2009.

Steve Brar, global product marketing manager at HP Networking, explained to Enterprise Networking Planet that among the new capabilities, the 5400R adds redundant management module capability. On the 5406R zl2, that means there are 2 power supply slots, and on the 5412R zl2, there are now 4 power supply slots.

In addition to the power supply redundancy, support for full PoE+ (Power over Ethernet) now delivers up to 30W of power on all ports.

The overall capacity of the 5400R zl2 switch series is also greater than its predecessors, thanks to an upgraded fabric capacity of up to 2Tbps via a fifth-generation ProVision ASIC. 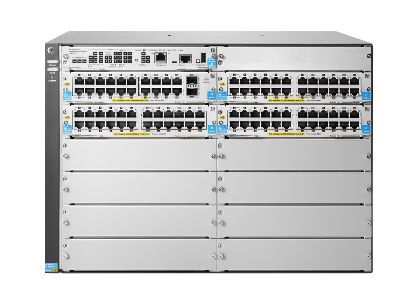 Brar noted that the 5400R fits well in campus, SMB, and enterprise environments.

“For existing customers, we are positioning the 5400R as the go-to product for expansion or new deployments,” Brar said. “Customers can also benefit from investment protection, as their existing interface modules will work in the new 5400R chassis.”

HP first announced its VAN SDN vision in 2012 and has been steadily delivering components ever since. Key to the VAN approach are the applications, which include security and unified communications tools.

“Today we have customers using our Network Optimizer for Lync and Network Protector SDN apps with the existing 5400 switch in production environments,” Brar said.