CES: Internet of Things is Now

2014 will be the transformational pivot point for the Internet of Things. That’s the strong message that Cisco CEO John Chambers delivered during his Tuesday night keynote at the 2014 Consumer Electronics Show (CES). 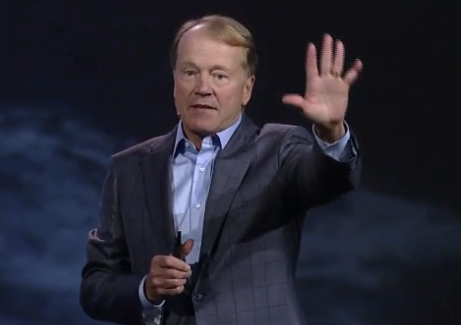 speaking slot to bring up multiple examples of how the the Internet of Things era will enable a very different world in the future.

“It isn’t just about a connected car or a refrigerator,” Chambers said. “It’s the combination of connecting things that allow for different outcomes.”

“It’s not just about connectivity of things. It’s about changing processes,” Chambers said. “It’s about getting the right information to the right person at the right time to make the right decision.”

It’s a market that Cisco estimates will be worth $19 trillion, and that’s the figure that Chambers said gets the most attention from business leaders as well as governments. He noted the public sector alone stands to gain $4.6 trillion from the Internet of Things opportunity as civic services get connected and get smart.

“It is the ability to bring it all together that will cause this transition to be bigger than anything that has ever happened in tech before,” Chambers said.

One potential use-case that most people have likely not ever thought of is for connected smart garbage cans, which Chambers pegs as a $10 billion opportunity. Chambers said that the way most cities collect garbage today makes no sense. With sensors in garbage cans, usage-based pricing and even pickups can be made more efficient.

“This is not about technology. It’s about how it affects peoples’ lives and businesses,” Chambers said.

Sean Michael Kerner
Previous article
802.11ac Wi-Fi Gets Speed Boost to 7 Gbps
Next article
Four Tips to Make the Most of the Cloud