Cisco is celebrating its 30th anniversary as a company by continuing to push forward in addressing the next generation of IT challenges.

While much of Cisco’s history has been dominated by networking hardware, Cisco has evolved over the years into much more than just a supplier of plumbing for networking engineers. That’s a fact that was on display this week as the company announced new analytics services that help to enable the emerging economy for the Internet of Things (IoT).

Among the new services are connected analytics for retail, service providers, network deployment and traditional IT. The basic idea behind the services is to extract value from all the data that is collected from connected IoT devices.

Cisco is working with multiple partners as part of the collected analytics effort. Those partners include Cloudera, Hortonworks and ElasticSearch. It’s not entirely clear how Cisco will work with partners and how much of the system is standalone. Cisco was unable to comment by press time.

During Cisco’s Global Editors event on December 11, Cisco CEO John Chambers said that his company had been 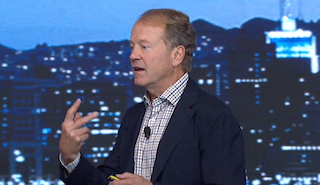 missing a data strategy for IoT, and the new solutions are differentiated from what already exists in the market.

“It’s about intelligence throughout the network,” Chambers said.

One of the largest efforts underway at Cisco today is the move toward Application Centric Infrastructure (ACI). ACI was first revealed under Cisco’s Insieme in November of 2013.

Cisco today has 1000 Nexus 9000 switch and ACI customers as the effort continues to gain traction.

Cisco is also moving forward with its Global Intercloud initiative, first announced earlier this year. Cisco has pledged to invest $1 billion in growing out Intercloud

Chambers said that his company has evolved to be more of a cloud and services company than ever before. He added that he is often asked by people what he is most proud of at Cisco over its 30-year existence.

“It’s about the innovation we have brought and it’s about our commitment to our customers, to our Cisco family, to our shareholders and our partners,” Chambers said. “It’s the ability to do that decade after decade, product after product, catch the market transitions, see around the corners to make it happen, that none of our peers have done.”

Sean Michael Kerner
Previous article
A Better Ethernet for a More Modern Data Center
Next article
Riverbed Set to Be Acquired for $3.6 Billion