Windows EBS 2008 is one of the many Windows Server products offering by Microsoft for small to mid-size businesses (SMEs).

Going back to Microsoft’s release of Windows NT/2000 Server, Windows Server has been considered an enterprise-priced and enterprise-class server. As IT becomes a necessity in any business, Microsoft has modified the licensing to allow a maximum amount of users and released Windows Small Business Server (SBS) 2003 to tackle the small-size businesses.

Windows Essential Business Server (EBS) 2008 comes in to fill the gap and target small to mid-sized businesses (SMEs) that rely on IT. But how can EBS align itself in the already saturated server market? What can EBS do for you? We’ll give you an introductory about this often forgotten server offering by Microsoft.

What Is Essential Business Server?

For business decision-makers, EBS offers a complete server (software) infrastructure. It includes security (antivirus/firewall), messaging (e-mail/fax), management and database solutions. For most common IT tasks, everything can be done in EBS ‘ no third party software is needed. The best part is that it’s affordably priced, at least to mid-sized businesses.

If you’re interested in the product particulars, EBS offers Forefront for Exchange Server, Threat Management Gateway, Exchange 2007, System Center Essentials 2007 and SQL Server 2008 Standard. It comes with a single console to assist in monitoring and managing all dependent servers and services.

You might assume that the included software packages are scaled down versions, but you would be wrong. The features found in EBS 2008 are actually the full-blown product. Being an SME doesn’t mean that you don’t require advanced technology to run your business, and Microsoft has treated this release like it’s not good business to remove much-needed features just because smaller customers cannot afford them.

There are two versions of EBS 2008, compared in the following figure: 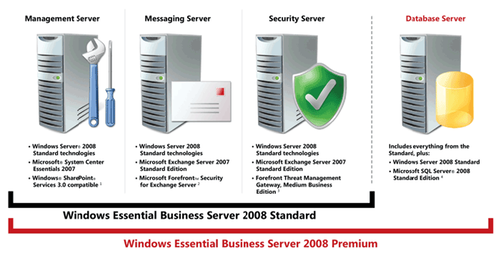 Product comparison of EBS 2008 Standard and Premium. Courtesy of Microsoft

EBS 2008 comes with a minimum of three Windows Server 2008 operating systems, which can be installed on three physical boxes, or can be virtualized into one single box.

When would EBS be a preferred choice? I’ve spoke to many customers about EBS, and here are some reasons they chose EBS:

For all SMEs I’ve met, they share one common thought: If the solution won’t save money, they won’t acquire the solution. Everything boils down to the Return on Investment (ROI). EBS 2008 is much cheaper than buying the messaging, security and management solutions individually. Combined with the easy-to-use administrative console, training and support costs will be much lower, further decreasing the total cost of ownership (TCO).

EBS 2008 caters to businesses with limited IT resources and unskilled users, such as those found in accounting or operations, and who use Excel as part of their daily job scope. For this reason, everything needs to be as simple as possible. Managing three or four servers is now as easy as opening the administration console. The administration console provides a high level view of the health of the server and clients, and built-in with numerous wizards. For the techies out there: Folder Redirection can be configured through a wizard. Digging through group policy is not needed in EBS 2008!

EBS 2008 comes with all the core infrastructure in place. No more concerns about integrating a third party software system to accomplish backup, or providing an antivirus solution throughout the company. If anything goes wrong and can’t be resolved, the only contact info you need is Microsoft Product Support Services (PSS).

Why Not Essential Business Server 2008

Nothing is perfect. EBS 2008 could be good for its own reasons, but there are still some drawbacks to going with EBS:

EBS 2008 supports only a maximum of 300 users. This model does not work for organizations which have a huge growth rate. Going EBS and migrating to the standalone versions would be expensive. Just jumping straight into the standalone Windows products will be much more cost effective.

Organizations which already have an existing third party solution (e.g. antivirus) might not appreciate the built-in security solution from Microsoft.

Each server also needs to have the recommended 2GB of memory and a vast amount of storage, which again is going to increase the cost. EBS 2008 is a powerful solution, but it also requires powerful hardware to work.

Essential Business Server 2008 has been on the market for quite some time, but there’s no significant deployment of EBS to date. Even EBS is not getting much marketing from Microsoft for whatever reason. I would also like to hear about your EBS stories, whether your organization did deploy, and what kind of issues did you face with EBS. If you would like to share your experiences, post a comment or drop me a message!

Enterprise Networking Planet would like to thank HP Malaysia for loaning us a ProLiant ML150 to test EBS.