So what has changed in the management consoles found in Windows Server 2008 R2? How have they changed and how are they better? We are going to look into the enhancements Microsoft has made.

What Are Management Consoles?

With Windows 2000, Microsoft introduced the Microsoft Management Console (MMC), which provides system administrators with a flexible interface through which they can configure and monitor their system. Since then, Windows administrative tools have been written around MMC.

Let’s introduce you to a few enhanced management consoles. These management consoles are built on Windows PowerShell, making the management consoles more powerful than ever. These consoles provide a standardized, graphical interface that simplifies administrative tasks and reduces overhead and costs associated with learning new tools. These tools have been reworked to be task-driven, enabling IT personnel to identify problems and take action immediately, regardless of whether the system is a physical, virtual, local or remote system. 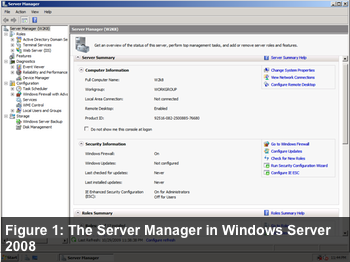 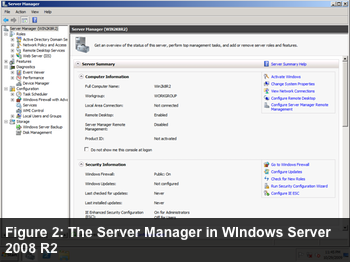 With the Server Manager found in Windows Server 2008 R2, you’ll notice that there’s an extra option to configure the server manager remote management. By running that tool, it will apply the necessary firewall settings for remote management of this server. This allows system administrators to monitor the health of all remote servers instantly by using their own workstation. 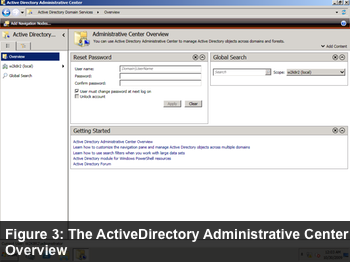 Active Directory Administrative Center provides a one-stop management console to link up users based on the tasks, and the commonly used task is listed under the Overview. Modifying users or security groups is also another common tasks by system administrators, and that’s the reason a global search field box is also part of the Overview. Changing the forest/domain functional level can also be done through this new management tool.

IIS Manager did not get a complete facelift, but major changes have been made from IIS 6 to IIS 7. IIS 7 is very modular, hence has task-based icons, simplifying management.

One important change to highlight: FTP server is finally fully integrated with IIS 7.5. Another management console to manage the FTP server is no longer required. As shown in figure 5, FTP Server role has been installed on Windows Server 2008 R2. On launching IIS Manager, a bunch of FTP options are now visible. FTP Server in this version also has support for FTPS, which allows to establish a secured FTP session. Personally I find this feature very welcome – finally we are able to send our FTP credentials in a secure format (unlike the traditional cleartext format).

We are going to look into remote Powershell in our next article. Stay tuned!