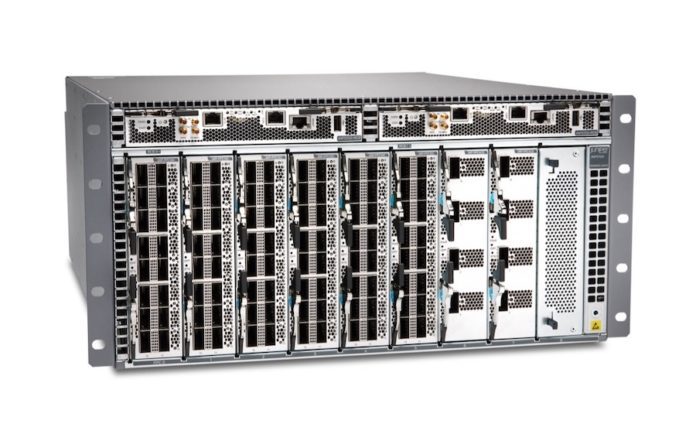 Juniper Network officials are looking at a future of multiple clouds and widely distributed IT environments with a new midrange switch that can scale to 400 Gigabit Ethernet speeds and includes intent-based networking software inherited when the vendor bought Apstra earlier this year.

The company this week unveiled the QFX5700 Series Switch, which offers a mix of port speeds from 10G to 400G and provides enterprises with a way to scale their networking capabilities to adapt to modern technologies and cloud-centric world.

That includes a flexible and cost-effective way to migrate to 400G to address increased traffic and new applications across multiple cloud environments, Bushong said. At the same time, they also need to reduce the complexity in managing and operating networks, which are key hurdles when scaling networks.

“What’s meaningful about the QFX5700 is that it allows customers to use different port speeds in their networks and evolve to networks they want next,” he said. “Even if they don’t have 400G plans immediately, they have a path to get there over time, all under the same hardware.”

The midsize chassis-based QFX5700 switch is Juniper’s first based on Broadcom’s Trident 4 programmable chipset, which can deliver up to 25.6 Tb/s of bi-directional bandwidth. It’s a 5U system with eight slots.

A Change in Networking

Bushong said the introduction of the new switch, and the capabilities it offers, illustrates a change in the way vendors think about networks. For the past 15 years, Juniper and rivals like Cisco Systems, Arista Networks and VMware essentially have been building similar hardware, using the same merchant silicon and addressing the same issues.

However, that has changed, with the focus shifting from inside the hardware to what the hardware enables, and vendors don’t necessarily agree on what the key problems are. For Juniper, the focus is less about speed and more about reliability.

“If you focus on reliability for networks, then the way you design products isn’t about configuration,” he said. “It’s making sure the configuration does what you want it to do. If you want repeatability, you start with a blueprint. You don’t make it about customized workflows, you make it about repeatable recipes.”

With the QFX5700 switch, organizations can use standard tech building blocks to transition to 400G at their own speed. At the same time, Juniper is leveraging Apstra technology to extend reliability into its platforms via blueprints for creating reusable operations.

“The idea behind the Apstra blueprints is to give you an expert data center without being a data center expert,” Bushong said. “Additionally, with the templates and Apstra blueprints, we don’t specify in Juniper-specific language. Users can take the blueprints and get that intent-based control in a multivendor environment, which is different from what Cisco and Arista are doing. We want to help people build the right data center, no matter the vendor.”

Apstra has been an important acquisition for Juniper, he said. Juniper bought Apstra to bring greater intelligence and automation — and thus reliability and consistency — into its portfolio to help create self-driving networking systems. It’s been a boon for the vendor’s data center business, which in the most recent financial quarter saw revenue jump 28 percent year-over-year.

In a blog post this week, Bushong wrote that since bringing Apstra into the fold, Juniper has added more than 50 new customers, with six of the Fortune 10 buying Juniper’s data center solution in the first half of this year.

“The acquisition has been transformative in every sense of the word,” he told Enterprise Networking Planet. “Apstra isn’t merely a better mousetrap. We are tackling problems that are fundamentally different from the rest of the market. Where others are focused on single panes of glass and customized configuration workflows, Apstra is using intent-based networking to tackle reliability head-on.”

Bushong added that “it’s not about removing keystrokes in pursuit of speed. It’s about making sure data centers are built the right way every time without fail. In that regard, Apstra is not just a different ‘how’ but a different ‘why.’”

The scalability of the new switch to support line cards with ports speeds up to 400G comes as demand for network bandwidth continues to grow. The pressure is coming from all over, from the rise of multicloud and hybrid cloud strategies and the Internet of Things (IoT) to the deployment of 5G and increases in video-based data.

In addition, the sharp transition to working remotely last year driven by the COVID-19 pandemic and the continued hybrid workforce model fueled the reliance on collaboration platforms.

In a report created for Cisco earlier this year, analysts with Futurum — pointing to Cisco’s Global Cloud Index — noted that this year, about 94 percent of workloads and compute instances will be processed by cloud data centers, with 6 percent being processed in traditional data centers.

“All of these drivers are fueling the unrelenting expansion of data center traffic and demand for high capacity 400G data center networking solutions,” the analysts wrote. “As the explosion in the capacity demands of data-hungry applications outpaces current high-speed transport abilities, 400G is a promising evolving technology that supports an immediate need in fiber optics with comparatively low operational expenses (OpEx) and a smaller footprint.”

However, even as enterprises push to 400G, 800G already is gaining steam. Dell’Oro Group analysts in a report in July predicted that in 2024, 800G adoption will surpass 400G ports.

Read next: Juniper Launches Software Agent to Protect Applications in Cloud, On Premises

Jeff Burt
Jeffrey Burt has been a journalist for more than three decades, the last 20-plus years covering technology. During more than 16 years with eWEEK, he covered everything from data center infrastructure and collaboration technology to AI, cloud, quantum computing and cybersecurity. A freelance journalist since 2017, his articles have appeared on such sites as eWEEK, The Next Platform, ITPro Today, Channel Futures, Channelnomics, SecurityNow, Data Breach Today, InternetNews and eSecurity Planet.
Previous articleBest Data Visualization Tools & Software 2022
Next articleHow to Create Robust Processes for GDPR Compliance for US Companies