Measuring the Public Cloud from a Network Performance Perspective

The cloud is typically thought of as being just about elastic compute resources. But all those resources are still connected across disparate availability zones, geographic regions and end users, via a network.

“Multi-national organizations that are embracing digital transformation and venturing into the cloud need to be aware of the geographical performance differences between the major public clouds when making global multi-cloud decisions,” said Archana Kesevan, report author and senior product marketing manager at ThousandEyes.

Among the high-level observations in the ThousandEyes report is that not all clouds are connected in the same way.

For example, AWS uses public Internet links for much of its delivery, whereas Azure and GCP rely on their own backbone networks. Relying on the public Internet potentially exposes AWS traffic to operational risks, according to ThousandEyes.

When it comes to cloud-to-cloud, or “multicloud” connectivity, the three public cloud providers all directly peer with each other, with packet loss of only 0.01 percent and a high level of stability.

Overall, ThousandEyes reported that across 55 global regions spanning the three major public cloud providers, network packet loss is negligible to end user locations, everywhere in teh world, except for users in China and Taiwan.

Latencies across different availability zones for the public cloud providers was also small, though it did vary. ThousandEyes reported on average inter-availability zone latency in GCP was the best at 0.79 milliseconds, AWS came in at 0.84 ms and Azure was 1.05 ms.

Geography also plays a role in cloud latency, with GCP having more network latency than AWS and Azure for routes connecting Europe to India. AWS was reported to have less network performance stability in Asia than either GCP or Azure.

“While the overall performance data is encouraging, it’s important to remember that cloud provider network connectivity is still generally a best effort service,” the report states. “Furthermore, even cloud giants aren’t exempt from events that can negatively impact performance. Continuous monitoring, data-driven planning and a well-defined operational process are essential to success.” 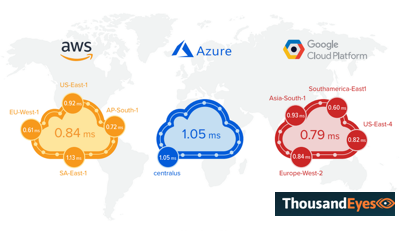 Edge computing is revolutionizing the way businesses operate. This has triggered...

A growing number of organizations are either outsourcing their services or...