Starview Adds Analytics and Business Value to Cisco ONE

As Software Defined Networking (SDN) continues its march from trendy phrase to enterprise reality, emerging solutions promise to extract tangible business value from the concept. San Jose, CA-based operational intelligence software developer Starview Inc. aims to provide one of those solutions. As one of the dev partners selected by Cisco to build applications using Cisco’s onePK (one Platform Kit), Starview has leveraged the onePK tools and APIs to aggregate real-time application and network intelligence. The resulting SDN analytics solution could provide extensive value to SDN deployments.

The application-centric architecture Cisco envisions as SDN’s future will create new challenges. Applications will become ever easier to build and deploy, and ever more flexible in the environments in which they can run, but with that ease and flexibility come “the need to monitor, analyze, and ensure security across IT operations infrastructure,” according to Lauren Cooney, senior director of software strategy and planning at Cisco. And top decision-makers in the enterprise will take notice.

“In general, most of your C-suite don’t know how the control plane and the data plane work, nor do they care. What’s key to them is to optimize their investment in the network and their existing application infrastructure,” Tugrul Firatli, VP of business development at Starview, said. Optimization requires intelligence, which Starview has provided for nearly a decade.

Starview’s software focuses on real-time data analytics, as opposed to what Firatli calls the “store first, analyze later” paradigm more common to current big data analytics solutions. Immediate analysis and rapid response differentiate business leaders from those left behind. He explained, “With ‘store first, analyze later,’ by the time you’ve analyzed what’s happened in your business, it’s typically too late, especially in cases of large threats and large opportunities. The opportunity has passed, the threat has turned into a disaster, and all you can do is recover.” That’s particularly true of network intelligence.

Instead of “store first, analyze later,” Starview provides a platform whose in-memory architecture allows for real-time processing and analysis of vast amounts of data. It was this real-time capability that attracted Cisco’s attention, Firatli added, telling me that Starview’s background made the company a “natural partner to provide real-time analytics capabilities around the Cisco ONE initiative.”

Following collaboration between the two companies’ engineering teams, a collaboration which dates back to last year, Starview unveiled their solution at Cisco Live last week. The company is positioning their software as the glue between the network infrastructure and the application world in an application-centric SDN architecture.

Starview provides an interface that accesses all the network information within a Cisco ONE SDN infrastructure, correlates it with information coming from the applications layer of the network, and enables real-time analytics, orchestration, and control all the way down from the top of the stack to the bottom. Brendon Whateley, Starview’s principal solutions architect, walked me through some key elements of the interface.

Next: A demonstration of Starview’s SDN analytics software

Placed in the upper left section of the console, the Network Overview pane shows the network, which in the demo consisted of two Cisco 2951 routers, two Ubuntu Linux machines, and several small applications. The center panes, meanwhile, display server and router CPU use, while the charts on the right show average receive and transmit traffic flow for all interfaces configured on the two connected routers. 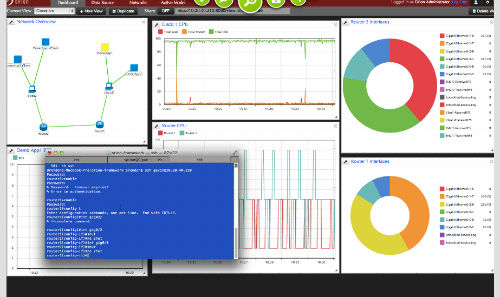 Whateley simulated the shutdown of Router 1. In the Network Overview pane, both the router and its connection to the computer went red to indicate the problem, as did the connection to Router 2 when it failed as well. 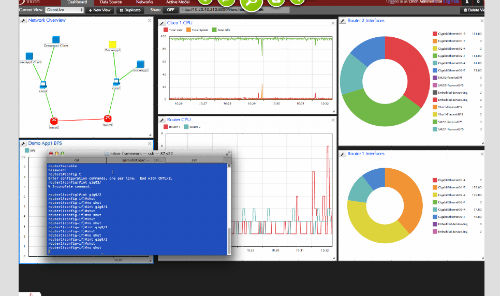 “All networking tools can do that,” Whateley said, but explained that what surprised the audience at Cisco Live was “the speed with which we could react to that behavior, which we can do because we’re using the onePK interface and monitoring the actual interfaces on the device,” allowing the software to provide an immediate notification when an interface goes down.

Whateley then called my attention back to the Network Overview pane to demonstrate the simplicity of app monitoring in the software. DemoApp1’s icon was yellow, indicating an issue. 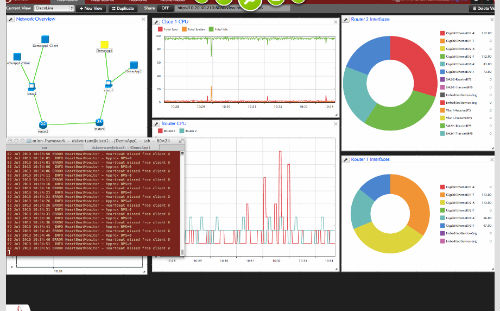 He brought up the app’s log file, through which administrators can perform both simple and complex interactions with the app, and resolved the issue, restoring the app to its blue, normal state.

To demonstrate the effects of a jump in traffic, such as what the network might experience if someone performed a large backup over a network link, Whateley sent a flood of 200,000 10K packets out from the DemoApp1 client. The app’s data consumption spiked, as the lower left pane of the console showed. Server and router CPU load spiked as well, changing in real time as the traffic flowed. Interestingly, the software revealed a CPU spike about twice as high on Router 1 as on Router 2. “We think it’s because they have different versions of the OS on them,” he explained, pointing out that with this view, “you can isolate and tell exactly where your problem is right away.” The software offers myriad additional options to dive deeper into the information and analytics flowing from various interfaces, offering a granular as well as a broad view of the network. And what it all adds up to is the ability to enable greater responsiveness to issues on the network.

Next: How Starview’s SDN analytics can help businesses

Among other things, the software can show when traffic from specific servers is flowing over interfaces experiencing historically unusual congestion. If those servers are business-critical, administrators can expect—and forestall—poor end user experiences, since they can isolate issues right down to the relevant interface and correct problems at their outset.

The combination of that isolation with the ability to look at the full stack allows for immediate or automated problem solving, as well as more informed decision-making for everything from network traffic control to web server instantiation. As another example, Whateley described an organization whose response times are increasing due to having insufficient web servers.

“If you ask VMware where you should spin up the new server, it will presumably look for the server with the most free capacity. But we might not choose to spin it up there, because we know that the connection from that box goes through a router that’s experiencing a lot of congestion. We might be able to tell VMware that a better choice would be a machine with fewer resources but a better network outlook.”

All this adds up to a way to unify the network and application sides of the enterprise for optimal monitoring and performance, resulting in greater business value to enterprises using Cisco ONE for their SDN architecture.

“Starview has an approach that we find unique in that it not only provides visibility into IT infrastructure for our customers but also analyzes the massive amounts of data among those applications. This will become increasingly important as the industry sees more and more SDN deployments,” Cooney said.

Starview’s software is currently in the beta testing phase, and the company is continuing to recruit beta testers. Starview expects to release the product by the end of the year, Firatli told me.