What’s Next for OpenDaylight SDN? Helium.

During the final keynote session at the OpenDaylight Summit on Wednesday afternoon, OpenDaylight Project Chairman of the Board Inder Gopal told the audience that the initial focus of the project was to get people to contribute code.

The project quickly realized that code contributions alone are not enough and that the successful projects within OpenDaylight are those with significant ongoing involvement from developers and maintainers.

“A community of one is not a community,” Gopal said. 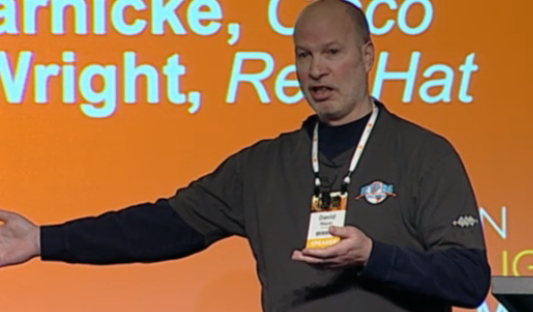 provided detail on what’s likely to come in the next major release, tentatively named Helium.

Among the new projects are one known as Application Policy Plugin, submitted by Cisco, and an Intel-contributed vSwitch proposal.

Meyer called a proposed Python OpenDaylight Client very interesting because the project needs to work on its language bindings. Most of OpenDaylight’s code is written in Java, while the open source OpenStack cloud project is mostly written in Python.

Developers also discussed other items on the future wish list. One of those items is a federated controller mechanism for OpenDaylight. Ed Warnicke, principal engineer at Cisco Systems, said that being able to coordinate disparate controllers is an important feature.

Mayer stressed that it’s important to understand that OpenDaylight Federation is about inter-domain state distribution and policy. Chris Wright, OpenDaylight board member and the technical director of SDN at Red Hat, said that the issue of Federation has been a hot topic.

“We don’t have East-West abstractions to talk to other controllers,” Wright said. “I think that our first task is to just get two independent instances of OpenDaylight talking to each other before we get really grand thoughts about global interoperability and Skynet owning everything.”

Another key item on the agenda for OpenDaylight in 2014 is security. Wright said that there are some authentication and authorization mechanisms in OpenDaylight today.

Christopher Price, OpenDaylight TSC member and head of network architecture and standardization at Ericsson, admitted that security hasn’t been a real focus in the project yet, as the developers have been pushing out the Hydrogen release.

From a process point of view, Mayer said that there is a need to refine the engineering systems such that fewer humans are needed and there is more automation.

That said, all the members of the OpenDaylight TSC emphasized that the project still wants more people to participate. The goal of automation is to make that participation more efficient.

Looking out on another year and trying to define what will make OpenDaylight a success, it’s clear that measuring downloads is not the key. Price said that it’s all about community, acceptance and then adoption. Red Hat’s Wright has an even loftier goal for the project.