Avaya is moving forward in 2012 with new leadership and integration plans for its networking business unit. Now sitting at the helm of Avaya Networking is industry heavyweight Marc Randall, who is currently the divisions’ senior vice president and general manager.

Randall is tasked with the job of leading the division forward and carving out a place for Avaya in the fiercely competitive networking business. Having served as the CEO of Force10, now a Dell company, as well working for Cisco as the vice president and general manager of the Scalable Network Business Unit Randall is no stranger to networking. Randall told InternetNews.com that the goal is now to move away from a siloed vision of networking and instead move to an integrated focus with Avaya’s application and communications efforts. Avaya now has three core business units: networking, applications and platforms.

“We’ve taken the structure that we had at the past at Avaya, where there were seven independent business units and we’ve collapsed them into three large business units,” Randall said.” We’ve put together shared services across the business units that are solutions based.”

Randall noted the company has now, in effect, re-organized itself as a company all about solutions.

Even with that key solutions focus, Avaya Networking has a legacy that it will maintain and grow over time; largely based on the assets of Nortel’s enterprise unit that Avaya acquired for $900 million in 2009. A key part of the former Nortel platform is the ERS routing platform.

“It’s a mature architecture and there will be innovation on the hardware side with more speeds and feeds,” Randall said. “The one direction that will be different is we’re looking to combine capabilities with the ERS for wired and wireless.” 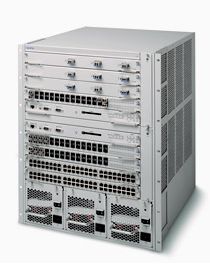 Randall noted that the plan is to bring more capabilities into routers and switches that are over and above just the forwarding of packets. It’s a plan that Avaya has been moving toward with their Virtual Enterprise Network Architecture (VENA) approach. VENA leverages the shortest path bridging (SPB) standard to help make networks easier to manage.

“VENA isn’t just one feature, it’s about a series of capabilities that allows enterprises to virtualize and improve provisioning,” Randall said.

Other networking vendors including Cisco have been advocating for the transparent interconnection of lots of links (TRILL) standard as way to help virtualize and improve provisioning. Randall noted that different networking vendors each have their own respective version of TRILL, which makes it difficult for enterprises to understand or use. As opposed to TRILL, Randall stressed that SPB is a standard today.

“The difference between what we’re advocating is that once you go to an SPB architecture, you can run all of your existing Ethernet protocols unchanged at the edge,” Randall said. “It simplifies deployment, management and all the configurations that you need to do are done at the edge.”

Randall commented that a key challenge for him is to get the message of SPB out into the market as it’s something that is not yet widely understood outside of the existing Avaya customer base.

As is the case with every other networking vendor, for Avaya to grow, they will need to take business from Cisco. Randall noted that he doesn’t necessarily get up every morning and focus on Cisco, but there are other rivals that he wants to take share from. These include Juniper, Extreme Networks, HP, Brocade and Cisco.

“We just take a very pragmatic and methodical approach to cutting into their business,” Randall said.