Rajiv Ramaswami leads the company’s networking efforts as executive vice president and general manager of the infrastructure and networking group at Broadcom. In an exclusive video interview with Enterprise Networking Planet, Ramaswami details where ARM fits in and why continued silicon innovation is necessary. 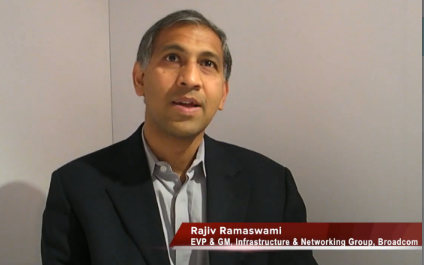 Broadcom’s processor families include both MIPS and ARM.

While Broadcom has been using ARM-based chips in its mobile products for many years, ARM is still relatively new for networking infrastructure.

Ramaswami noted that at the lower end of the Broadcom networking portfolio, his group is taking the ARM cores that have been developed by Broadcom’s mobile group and putting them into System-on-Chip (SoC) platforms.

For example, in a Wi-Fi access point, there is a radio and then there is a silicon chip, which can be a Broadcom ARM chip. Earlier this month, Broadcom announced its new StrataGX BCM58522 Series, which is an ARM-based SoC for Wi-Fi applications.

The StrataGX BCM58522 includes an embedded cryptography engine right on the chip.

“When we say SoC, that includes a whole bunch of functions beyond just the CPU,” Ramaswami explained.

At its most basic level, EEE enables networking gear to identify if a link is active or not and powers up or down as required. It’s a standard that Broadcom supports and is building on top of in its silicon solutions.

“We have a number of engineering developments in process to continue to improve energy efficiency from a network-wide view, rather than just a PHY view,” Ramaswami said.

One of the efforts that Ramaswami currently has underway is a reference design for SDN-focused switching gear. The SDN reference design will couple Broadcom silicon with SDN software from Big Switch Networks.

“Whenever we come out with a switch, we do have a reference design,” Ramaswami said.

Broadcom is not an official member of the newly formed OpenDaylight project, a multi-stakeholder effort that aims to build an open source SDN platform.

From a Broadcom perspective, the API approach overall is critical. Ramaswami noted that most Broadcom customers program their software against Broadcom’s APIs.

Software development for Broadcom’s silicon can be done on any number of different operating systems, including Linux, thanks to the APIs.

“It’s a low-level API to program registers on the chip,” Ramaswami explained. “You don’t want to be directly programming into the registers, so we abstract it out and we create an API that allows for the development of various elements of the chip.”

Moving forward, Ramaswami noted that the plan from Broadcom is to provide even higher levels of abstraction over time to enable software programmability. Currently, Broadcom’s APIs are very specific to its own chips, but over time, the vendor will include other industry-standard abstractions. One of those abstractions will come from the OpenFlow SDN protocol.

“OpenFlow is defining a set of abstractions and APIs that are completely out in the open standards,” Ramaswami said. “So we have our APIs at the lower level, then you have standards-based APIs that are above, and we will provide a bridge to those.”

Broadcom also develops silicon for use in Network Interface Cards (NICs) as well as LAN on Motherboard (LOM) server applications.

The chips for those applications are what Ramaswami described as microcore engines that are are more optimized for data path processing than a regular ARM CPU.

For Ramaswami, the key challenge in moving his business forward is all about continuing to accelerate the pace of innovation.

“From a technology perspective, it’s about keeping the pedal to the metal and continuing to drive new geometries,” Ramaswami said. “Innovation is our lifeblood. We have to keep innovating and driving new technologies forward.”

Watch the full video interview with Rajiv Ramaswami below.