Brocade is beefing up its switching and routing portfolio today with a pair of releases that deliver enhanced scalability for the company’s Ethernet Fabric vision.

As application infrastructure become increasingly virtualized, there is a need for increased scale within networking infrastructure. To address that issue, Brocade is announcing the new VDX 8770 switch which builds on the company’s existing VDX portfolio.

The VDX product family was first announced in 2010, with support for up to 60 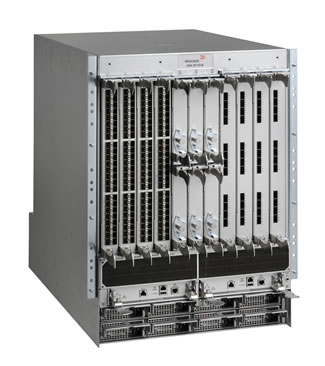 ports of 10 GbE. The new VDX 8770 expands the port density and scalability with four or eight modular I/O slots that can support modules of GigE, 10 GbE, 40 GbE and in the future 100 GbE ports.

“The backplane of this new platform can support up to 4 Tbps per slot,” Premal Savla, senior product manager at Brocade, told Enterprise Networking Planet. “What that means is I could have 20 ports of 100 GbE wirespeed in a single module.”

In terms of 10 GbE, the real estate on the VDX 8770 can provide up to 48 ports per module. On the 8 module version of the VDX 8770 that translates into a 10 GbE port density of up to 384 ports. For 40 GbE, the maximum density is 96 ports on an 8 slot chassis. The specified latency of the switch is 3.5 microseconds from any port to any port.

Combined with Brocade’s VCS (Virtual Cluster Switching) capabilities, up to 24 VDX switches can be combined in a cluster, providing even more scalability all the way to 8,000 ports.

Savla explained that in the initial VDX launch their was multi-path support at Layer1 and 2. The Layer 2 multi-pathing was achieved with TRILL(Transparent Interconnection of Lot of Links). In the new NOS update, Layer 3 is now also supported.

“As we scale and flatten the data center with fabric, what is happening is that bottlenecks are occurring at the gateway layer,” Savla said. “Layer 3 gateways is where hosts talk to router to head out to the network core.”

An improvement in VCS that runs on the VDX is that it now enables support for up to four active gateways within a data center environment. Additionally, the VDX 8770 will now support VXLAN and GRE tunneling. VXLAN is an emerging standards effort led by VMware to provide a Layer 2 overlay scheme on Layer 3 network

“From a data center administrator point of view, this provides a lot of visibility for these newer traffic types,” Savla said.

In addition to beefing up its switching portfolio, Brocade is providing new scale for its MLXe core router platform. The MLXe was first announcedin 2010 with support for up to 32 ports of 100 GbE and 256 ports of 10 GbE.

Brocade is now announcing a new 10 GbE module that will triple the number of ports that can run on an MLXe, with a new 24 port 10 GbE module. With the new module, up to 768 ports of 10 GbE can run on a single MLXe chassis.

The new ports are powered by Brocade’s MaxScale ASIC technology, which is the company’s fourth generation high-performance packet processor silicon. The new ASIC also delivers power savings of up 57 percent per port.

The IronWare 5.4 Operating System underpins the updated MLXe and will now support OpenFlow which could enable the MLXe to be the core router of a Software Defined Networking (SDN) deployment.

Rajagopal noted that his company’s OpenFlow story isn’t just a theoretical idea either. He noted that the Internet2 research network is already using the new IronWare 5.4 system with OpenFlow in a production network

“Internet2 is deploying a nation-wide network based on 100 GbE using OpenFlow,” Rajagopal said. ” It’s a highly scalable network that is close to 9 Tbps of caacity and over 15,000 miles of fiber.”