A cornerstone of the networking market globally are the Ethernet switch and routing markets, which form the basis of enabling connectivity and access. As it turns out, it’s a market that still has room to grow.

For the second quarter of 2019, analyst firm IDC reported global revenues from Ethernet switch vendors reached $7.07 billion for a 4.8 percent year-over-year gain. Router revenues also grew, albeit at a slow pace of of 3.4 percent, for quarterly revenue of $3.96 billion.

In the switch market, growth is largely being driven by higher speed Ethernet platform including 100 GbE and 25 GbE. IDC reported that 100 GbE switch revenue in the second quarter was $1.28 billion for a 42.9 percent year-over-year gain. The revenue growth was driven by 100 GbE port shipments that expanded by 58.3 percent to 4.4 million. 100 GbE now represents 18.1 percent of the total revenue in the global Ethernet switch market.

Also growing fast are revenues and port shipments for 25 GbE, with shipments growing by 74.5 percent and revenue hitting $364.1 million for an 84.8 percent gain. In contrast, 10 GbE port shipment only grew by 2.6 percent.

IDC isn’t the only analyst firm that is seeing growth for 25 GbE. Dell’Oro Group also highlighted 25 GbE in its Controller and Adapter 2Q 2019 quarterly report .

“25 Gbps continues to gain momentum across key vendors in the high-end Enterprise market,” said Baron Fung, Director, at Dell’Oro Group. “Among the major Cloud service providers, which generally deploy 25, 40, and 50 Gbps ports, growth was mixed, as select companies are still undergoing server capacity digestion. Thus, we continue to anticipate great volatility in this sector for these higher speed ports.”

Leading the switch market once again is Cisco, coming in with 51.1 percent market share by revenue, building off a 6.8 percent year-over-year increase in revenue.

Chinese network equipment vendor Huawei, which is under pressure by various governments around the world ranked second with a total switch market revenue share of 9.7 percent. Arista Networks holds done the number three slot with a 7.3 percent market share.

“Network transformation remains a top priority for enterprises around the globe as they look to expand their businesses and delight customers with agile connectivity,” Rohit Mehra, vice president, Network Infrastructure wrote in a statement. “Increasingly, organizations are realizing the critical role modernizing the network plays in creating a digital business, which will continue to drive growth in the Ethernet switching and enterprise router platforms into the foreseeable future.” 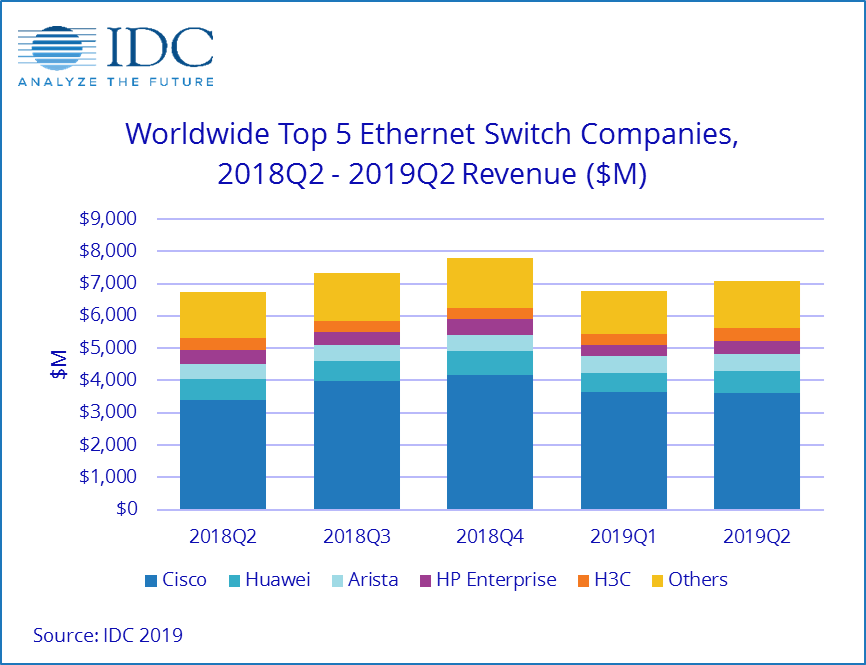