Vendors are continuing to make money in the Ethernet switching market as demand for new speeds continues to grow.

Analyst firm IDC reported in its Worldwide Quarterly Ethernet Switch Tracker and Worldwide Quarterly Router Trackers that the global Ethernet switch market grew to $6.75 billion in the third quarter of 2017, for a 7.4 percent year-over-year gain. The global router market, in contrast, had $3.91 billion in third quarter revenue, for a 9.4 percent year-over-year gain.

Among the fastest growing areas of the networking switch market are 100 Gigabit Ethernet (Gb) ports. According to IDC, in 3Q17, 100 Gb brought in $608 million in revenue, shipping 1.2 million ports. The nascent market for 25 and 50 Gb Ethernet is also starting to grow, with $85 million in 3Q17 revenue on shipments of 750,000 ports.

In the enterprise, 10Gb continues to be the workhorse and had port shipment growth of 49.6 percent year-over-year. Overall, 1Gb connections still continue to dominate the total volume of Ethernet port shipments, with 105.9 million ports in 3Q17.

“Strong application-related infrastructure and services requirements at the edge and core are continuing to complement significant cloud buildouts, keeping the demand side humming for network infrastructure,” Rohit Mehra, vice president, Network Infrastructure at IDC, stated. “In parallel, connecting the edge to the core and cloud requires upgrades to WAN connectivity for which we continue to see increasing demand across enterprises as well as service providers, leveraging the architectural disruptions from areas like SD-WAN and mobile backhaul.”

In terms of vendors, Cisco continues to lead the market, holding a 56.7 percent share of the Ethernet switching market in 3Q17. 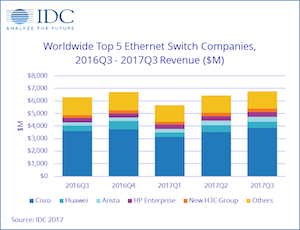