There was a time when all network switching gear was based on some form of proprietary firmware operating system. In 2013, that started to shift, with the launch of Facebook’s Open Compute Project (OCP) networking effort and now six years later it’s an effort that is dominating the bare metal switching industry.

According to IHS Markit | Technology’s Data Center Network Equipment Market Tracker – Q2 2019 report, bare metal switches, that is switches that do no come with a pre-loaded/hard-coded network operating system are a fast growing segment. IHS Markit forecasts that bare metal data center switches port shipments will represent 34 percent of ports shipped in 2023, up from the 20 percent reported for 2018.

Driving the bare-metal swtich market forward are Open Compute Project certified switches. According to IHS markit, OCP certified switches had a 55 percent share of bare metal data center switch port revenue, at $221 million. That’s a dramatic gain from the second quarter of 2018 when the share was reported at 34 percent. 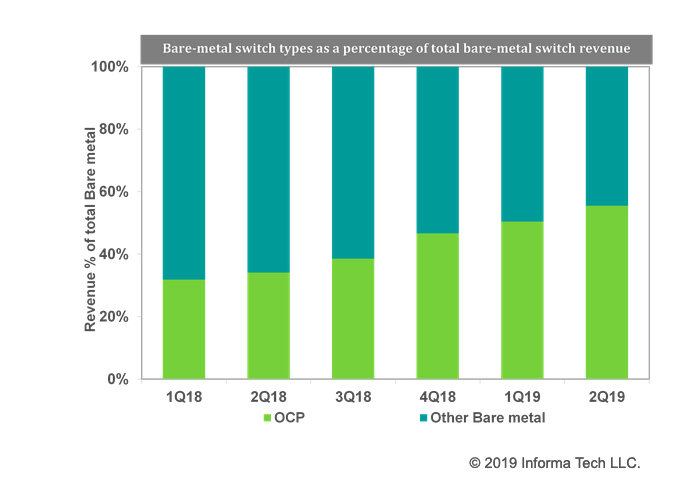 “This year’s survey results and the latest DC Networking Market Tracker confirm that OCP-certified switches have moved past the trial and wait-and-see phases,”Devan Adams, principal analyst at IHS Markit | Technology stated. “Customers now are confident in them and are deploying them in critical parts of their DC networks.”