This week, wireless networking vendor Xirrus announced its latest entrant into the space, the XR-2425H wireless array. An outdoor version of the company’s indoor XR-2425 wireless array, the XR-2425H includes four 802.11n radios and eight integrated antennas. Inside the array is a Linux-based ArrayOS operating system to provide wireless features, including security capabilities.

“There are some differences in the design to ensure the product can handle the temperature extremes, but the internal circuit boards of the XR-2425H are all based on the same design as its indoor sister product, the XR-2425,” Bruce Miller, vice president of Product Marketing at Xirrus, explained to Enterprise Networking Planet.

The intended deployment use-case for the new XR-2425H is in outdoor locations, such as stadiums, race tracks, 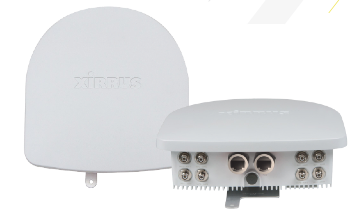 open fields and campus areas where hundreds or thousands of people gather at one time. Miller said that with four radios included on the XR-2425H, the device has double the radio count of typical outdoor APs.

The more radios present on a wireless access point, the more users and bandwidth it can support. On the XR-2425H, Miller said that the maximum concurrent devices connected is 960, which is 240 per radio.

“In practice, you may not design to this level since users are sharing the bandwidth across the four radios,” Miller said. “However, the product will readily support hundreds of concurrent devices in practice.”

A common challenge in all types of modern wi-fi deployments, particularly ones that are outdoors, is access to the WAN for traffic backhaul. With the XR-2425H, the arrays can be be deployed in a mesh-type approach. Miller explained that one to three of the radios can be used for mesh backhaul, so not every array needs to be physically hardwired to the network.

Xirrus will not be offering 802.11ac access speeds on the XR-2425H. The new 802.11ac wi-fi specification offers the promise of up to 1 Gb of connectivity. Xirrus recently announced a new indoor two-radio XR-630 array, which does support 802.11ac.

As to why Xirrus did not outfit its new outdoor array with 802.11ac, Miller said that for high-density outdoor deployments, users are often throttled down to perhaps 1Mbps throughput to accommodate high numbers of users.

“So the higher 11ac data rates, while they would help, are less important than in cases where you have specific high bandwidth requirements,” Miller said. ” But we will be rolling out 11ac into our outdoor products.”