Demand for routers and switches at both enterprise and service providers around the world continues to grow, according to a pair of analyst reports.

According to IDC’s latest statistics, the global Ethernet switch market grew by 8.5 percent year-over-year to $5.5 billion in the second quarter of 2012.

The big driver of growth on the enterprise switch side is 10 Gigabit Ethernet (10 GbE). IDC reported that 3 million 10 GbE ports shipped during the quarter, delivering 22.9 percent revenue growth over 2011.

Cisco continues to dominate the enterprise switch market with a 62.1 percent share. When it comes to 10 GbE, Cisco’s share is even higher, coming in at 66.8 percent.

“Building on the momentum from the previous quarter, the positive 2Q12 performance in the Ethernet switch market shows that the network continues to play a pivotal role in IT infrastructure rollouts,” said Rohit Mehra, director, Enterprise Communications Infrastructure at IDC in a statement.

Mehra added that both 10 GbE as well as 40 GbE Ethernet switch segments are helping to lead growth. In his view, the growth of networking demand is linked to the growth in applications, virtualization, and mobility, which is all powered by underlying networking infrastructure.

While higher speed 10 GbE and 40 GbE are the future, IDC also noted that the 1 GbE segment is growing too.

“Even the Gigabit Ethernet segment showed strength in 2Q12 with over 55 million ports shipped in the quarter, and market revenues growing 6.5 percent from the previous quarter,” said Petr Jirovský, senior research analyst in IDC’s Networking Trackers Group said in a statement. “The overall market drivers, such as proliferation of video traffic on the network, are mitigating to a large extent the increased macroeconomic uncertainty and weakness in the public sector in many regions.”

Service Providers are also continuing to spend on networking gear. According to 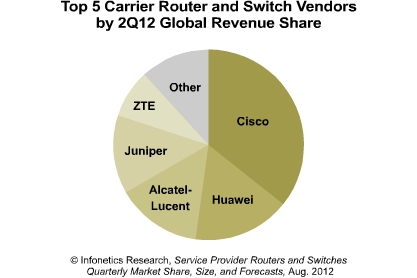 the latest global service provider router and switch report from Infonetics, the market generated $3.5 billion in the second quarter of 2012.

Infonetics noted that a nearly 50 percent increase in revenue in China propped up the market during the second quarter.

“While Cisco has long led the global IP edge and core router market by very comfortable margins (and whose share is steady from this time last year), Alcatel-Lucent, Juniper and Huawei have been fighting it out every quarter for the past year-and-a-half for the next 3 leadership positions,” Michael Howard, Infonetics Research’s co-founder and principal analyst for carrier networks, said in a statement. “The race tightened considerably in the 1st half of 2012, with Huawei taking the #2 spot in the 2nd quarter.”