The OptiView XG V10, announced in April 2013, is a 10.25in Windows 7 tablet with excellent connectivity and a comprehensive suite of Fluke’s customizable network analysis tools. What makes it a network manager’s best friend is its ability to troubleshoot applications and stress test wired and wireless networks while concurrently diagnosing and monitoring network traffic in real time. Those advanced capabilities come at a price,though. The basic OptiView XG 10G, which can handle 10Gbps traffic, starts north of $25,000.

At first blush, the price may seem on the high side, but the true measure of the product’s value comes down to how much time the device can save and what network problems it can solve. After all, on a busy network, traffic interruption can cost big bucks.  For some enterprise networks, those costs can reach thousands of dollars per minute. That quickly justifies the price of advanced tools, such as the OptiView XG v10. 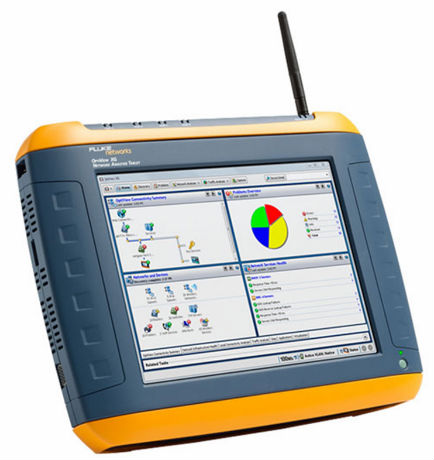 A closer look at the OptiView XG v10

Built around a customized 10.25″ Windows 7 Tablet, the OptiView XG v10 features a plethora of ports and connectivity options. It’s no lightweight device, either, weighing in at a little over 5.5 pounds. Its heft serves a purpose, though: it has the processing power to handle and analyze traffic at a full 10Gbps line rate and the ruggedizing to handle some rough treatment. In other words, Fluke Networks has crammed the processing power of a workstation and the full functionality of a protocol analyzer into a tablet that proves portable enough for use from most any location and tough enough to deal with the bumps and bruises of frequent travel.

What’s more, the OptiView XG v10 features support for wireless systems, making it ideal to use with Fluke Network’s AirMagnet wireless diagnostic tools. One of the device’s most impressive features is its ability to simultaneously stress test the network and diagnose issues in real-time. The OptiView XG automates root-cause analysis of wired and wireless network and application problems, allowing the user to spend less time on troubleshooting and more time on other initiatives. It can support the deployment and troubleshooting of new technologies, including unified communications, virtualization, wireless, and 10 Gbps Ethernet, and can also identify key switch anomalies, use packet capture features for troubleshooting performance issues, and conduct wireless analysis. The primary feature set of the device includes:

Hands-on with the OptiView XG v10

I tested the Fluke Networks OptiView XG v10 on several different networks, ranging from a basic SME-type network consisting of a 10g backplane to an enterprise-level network sporting multiple dedicated connections to remote sites. For testing, I focused on the device’s ability to stress test network traffic and its ability to identify traffic problems and discover the network inventory.

I had no difficulties getting started with the OptiView XG v10. I simply had to plug the unit into my network and let it start the discovery process. The unit will automatically start discovering as much information as it can by using a combination of network snooping and port scanning. I found the process very quick on smaller networks, though I suspect that if your network consists of thousands of devices, you may want to take a break and let the OptiView XG v10 chug away, since it could take a few hours if your network is quite large and quite partitioned. If you opt for the unit’s wireless options, you can perform discovery over a WiFi connection, but expect that to take additional time based upon available WiFi bandwidth.

I used the network discovery capabilities on a network with approximately 120 devices. OptiView accurately discovered most of the devices in a matter of minutes (some of the devices were powered off during the test).

After completing the discovery process, the device presented me with the results in the default dashboards. The default dashboards provide a great deal of information, with an overview on the home page of how many devices of varying types the OptiView XG v10 discovered and what percentage of them have issues that require attention. If the discovery process misses parts of the network, you can configure specific IP address ranges to scan.

After discovery and building my dashboards and maps, I conducted a stress test across some systems connected via a 10g Ethernet switch. I was able to quickly launch a process to test the network connection and was able to view the results graphically on the device

The OptiView XG v10 uses a variety of methods to detect information on the network, including the basic network sniffing tools, such as SNMP, NetFlow, and other management protocols. The device can also query a majority of network equipment from various vendors using other management protocols. The device currently supports several major vendors, and Fluke adds others pretty frequently.

I found the discovery, reporting, and mapping tools on the device to be incredibly powerful, quickly providing information that I needed to troubleshoot or detect problems. The OptiView XG v10 is capable of more than that, though. For example, I was able to quickly set up a point-to-point test using a PC to remote control the OptiView tablet. When performing that test, I was able to generate traffic between two endpoints, one the OptiView tablet and the other a client PC, and then monitor, record and analyze the traffic to see how packets traversed the network. That makes the Optiview tablet a great tool for validating switching technologies, uncovering bottlenecks and testing connectivity.

The the pressure-sensitive touchscreen can be operated with a finger or with the supplied stylus, but since some of the Windows icons are a little on the small side, the stylus is a better choice. I also found that the battery life on the unit was about three hours. You’ll have to find a power outlet relatively quickly if you’re using the device all day in the field. If the touch screen isn’t your cup of tea, the unit also allows you to plug in a USB mouse and keyboard.

As mentioned above, you can remote control the device over the network with a Windows PC. That’s handy if you want to place the device in a data center and still perform all of your network analytics from the comfort of your desk (or remote site, or while out in the field with a laptop).

With the latest iteration of the OptiView XG v10, you can delve into application issues as well, especially in environments that use VMware extensively to virtualize servers and applications. Fluke Networks has incorporated tools into the device that can query VMware products and gather relevant information. That discovered data can be used to launch tests, monitor network performance, and give network managers insights beyond the physical network and into the virtualized services that today’s networks run.

While that may seem like trivial now, the coming storms of software defined networks (SDN), software defined data centers (SDDC), and virtualized storage will complicate network management and troubleshooting. It’s nice to see that Fluke Networks has taken the needs of the network manager faced with virtualized solutions into account with the OptiView XG v10, which may ultimately help future-proof the device and provide years of troubleshooting capabilities.

The OptiView XG v10 is an excellent tool for the busy network manager and does what it claims to do very well. The device’s ability to collect vast amounts of information from just about any device on the network and its ability to look beyond hardware makes it second to none. Those capabilities don’t come cheaply, though.

I found the overall design of the interface easy to use, and I liked the point and click drill down capabilities offered by the dashboards. Ultimately, anyone can quickly get up to speed on how to use the unit and offer troubleshooting capabilities almost instantly.

The OptiView XG v10 is clearly designed for someone with networking knowledge and insight into the operations of the target network, however, so don’t place this unit in the hands of an amateur or junior technician. Nevertheless, network managers that have struggled with a hodgepodge of various troubleshooting tools will find the OptiView XG v10 a godsend. That’s if they can squeeze it into their operational budgets, of course.