Cisco has long dominated the global market for switches, and as each new generation of Ethernet speed comes out, Cisco has come out with new switches and line cards. 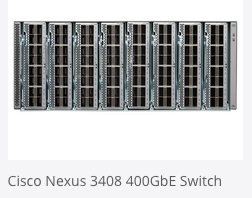 For 400 Gigabit Ethernet (400G), Cisco is now finally unveiling its data center switches with an emphasis on providing more than just more bandwidth.

“Nexus 400G switches bring more than just a new level of speed to the network; they bring flexible deployment options for different sizes and workloads so you can build large-scale 100G and 400G fabrics without sacrificing cost efficiency, Thomas Scheibe, vice-president of product management for data center networking at Cisco, wrote in a blog. Cisco’s entry into the the market for 400 GbE data center switches follows similar announcements made by its rivals earlier this year. Back in July, Juniper Networks announced its 400 GbE efforts, while Arista announced its plans in October.