Global Internet Traffic On Track To Hit 4.8 Zettabytes by 2022

Year after year, global internet traffic has gone up, with no apparent end in sight.

The staggering amount of volume growth in the internet is summarized by Cisco in its recent Visual Networking Index (VNI). According to the VNI, from 1984 until 2018, 4.7 zettabytes of IP traffic traversed the internet. By 2022, five years from now, Cisco is forecasting that total internet traffic will reach 4.8 zettabytes per year, meaning that more traffic will be created each year than in the 32 years since the internet started.

The busiest hour of internet traffic — the period of time for peak traffic — is currently forecast to grow at a 37 percent Compound Annual Growth Rate (CAGR) over the 2017 to 2022 time period, hitting a peak of 7.2 petabytes per second in 2022.

There are a number of factors driving the continued growth of internet traffic over the next five years. One is the growth in the total number of users. In 2017, Cisco reported that there are 3.4 billion internet users, which wil grow to 4.8 billion by 2022.

“The size and complexity of the internet continues to grow in ways that many could not have imagined,” said Jonathan Davidson, senior vice president and general manager, Service Provider Business at Cisco. “Since we first started the VNI Forecast in 2005, traffic has increased 56-fold, amassing a 36 percent CAGR with more people, devices and applications accessing IP networks.” 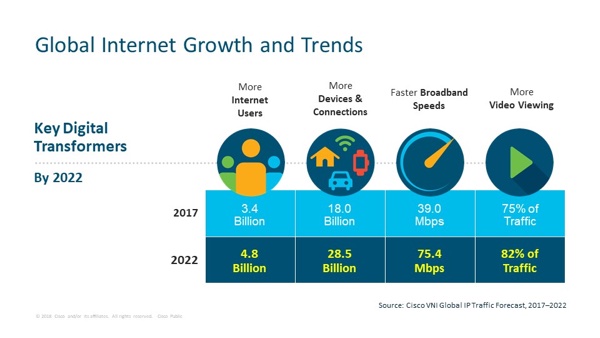