OpenDaylight is made up of a collection of different networking capabilities that can be combined into an architecture to enable a complete SDN platform. Among the new features in OpenDaylight Fluorine, the Service Function Chaining (SFC) project supports Network Service Headers (NSH) for accelerated service delivery. The BGP and Path Computation Element Protocol (BGPCEP) for IP Transport has been improved to enable better SD-WAN use cases for inter-data center connectivity.

Optical transport also gets a boost in the OpenDaylight Fluorine release, with the debut of the TransportPCE project, which is a reference implementation of Open Reconfigurable Optical Add-Drop Multiplexer (ROADM). The TransportPCE project enables network operators to configure their Wavelength-Division Multiplexing (WDM) equipment such that it can handle requests coming from an SDN controller.

Other updates across the OpenDaylight Fluorine release include a new rate limiting feature for the SDN controller component to help protect against overload and potential denial of service attackers. Fluorine also provides improved capabilities for operators to detect BGP network failures. Additionally, the new release provides enhanced security and access control with support for both stateful and stateless security groups.

“Fluorine is one of the most streamlined releases to date for OpenDaylight, delivering a core set of mature components needed for most major use cases in a ‘managed release’ for easy consumption by commercial and in-house solution providers, as well as by downstream projects such as ONAP and OpenStack,” Phil Robb, vice president, Operations, Networking, and Orchestration, The Linux Foundation, wrote in a statement.

OpenDaylight first started in April 2013 as a Linux Foundation Collaborative Project, with the goal of building an open SDN platform. The Fluorine release is the second OpenDaylight update of 2018, following the Oxygen release that debuted in March.

Overall, the OpenDaylight Fluorine release had over seven thousand code commits, from over 140 code contributors and 18 participating organizations. The next major release of OpenDaylight is named Neon and is expected before the end of 2018. 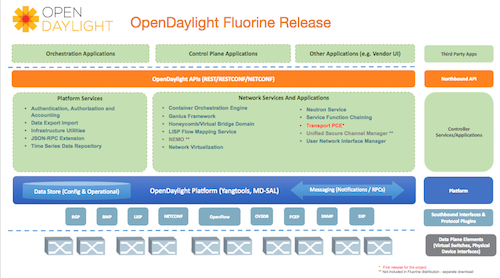