Virtualization has arrived in enterprise IT thanks to the benefits it confers in decreased power usage and lowered hardware acquisitions; two factors that reduce total cost of ownership (TCO), which almost always
makes management happy. 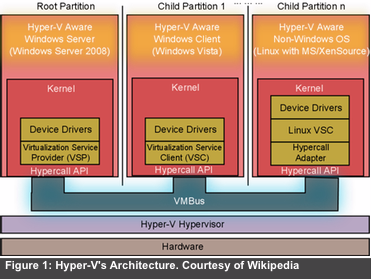 Microsoft’s competitor in the virtualization industry, VMWare, is many steps ahead of Microsoft. VMWare’s early lead attracted a lot of customers to its virtualization ecosystem. Compared to VMWare, the major
setbacks for Hyper-V lie in its inability to dynamically provision virtual machines and disaster recovery.
Another big disadvantage is its lack of support for guest operating systems. VMWare ESX supports
practically every operating system ever built on almost every type of hardware, but Microsoft’s Hyper-V supports
only select Microsoft server and client operating systems.

Another major strike against Hyper-V 1.0 was its inability to do a zero downtime migration, which required moving the VM state and the storage. Such a move could take anywhere from a few minutes to a few hours, depending on the storage size involved. Using VMWare’s VMotion, state and storage can be moved over in less than a second.

It’s commonly believed that the first release of most Microsoft products does not attract major customers, with the company iteratively refining its offerings over subsequent versions. That pattern holds with the release of Hyper-V 2.0, which comes with Windows Server 2008 R2. Among the more important key features:

While this article has covered on server virtualization by using Microsoft’s virtualization technology –
Hyper-V. Our next article will cover RemoteApps for Windows Server 2008 R2 and how it can help us
virtualize our software applications.

Jabez Gan
Previous article
Privileged and Shared Accounts – Why You Must Close this Security Hole
Next article
Avaya, NES – and the Future of UC