SD-WAN Finally Gets a Formal Standard

Software-Defined WAN, commonly referred to as SD-WAN is an approach that vendors have been talking about since at least 2014, but it wasn’t until this past week that the technology got a formal specification.

On Aug. 21, the Metro Ethernet Forum (MEF) officially published what it claims to be the world’s first standard which formally defines what SD-WAN and its service attributes are all about.

“The MEF SD-WAN standard efforts come at a good time as customer adoption starts to increase and service providers struggle to keep up with market demand,” commented Mike Sapien, Chief Analyst, at Ovum Enterprise Services. “Hybrid networking, including SD-WAN services, can only grow in adoption and deployment, and having the same definitions and standard for comparison should make it easier for the providers and customers to understand the various service attributes and confirm feature alignment.”

The standard is formally defined as MEF 70 “SD-WAN Service Attributes and Services” and come along with a 57-page document which defines SD-WAN.

“An SD-WAN Service provides a virtual overlay network that enables application-aware, policy-driven, and orchestrated connectivity between SD-WAN User Network Interfaces, and provides the logical construct of a L3Private Routed Network for the Subscriber that conveys IP Packets between Subscriber sites,” the standard’s abstract states.

The MEF 70 provides some color and explanation of what the service attributes are that an SD-WAN subscriber can benefit from, including rules associated with how traffic is handled. The standard also defined a number of key concepts that are part of SD-WAN.

Among the key concept that are now defined:

SD-WAN Edge – The SD-WAN Edge is the network function (physical or virtual) at the Service Provider side of the UNI reference point. 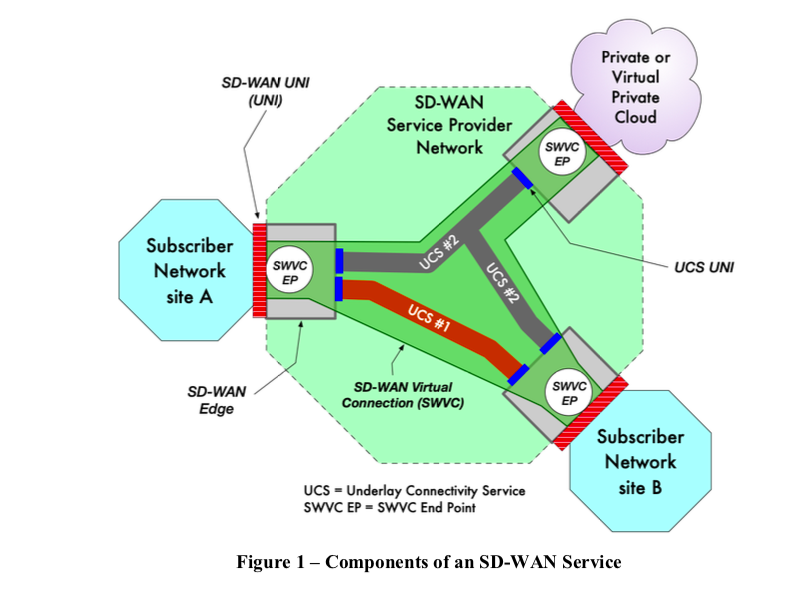 As to why having standards in place for SD-WAN are no important, Roman Pacewicz, Chief Product Officer, AT&T Business commented that AT&T has seen a significant change in how customers are using SD-WAN now versus two years ago, and that evolution is what makes service standards from MEF so critical.

“Today, and moving forward, SD-WAN is about delivering application performance,” Pacewicz commented. “MEF’s role is creating a standards-based, intelligent network across multiple carriers that will eliminate friction as we work with each other to deliver application performance at the level of efficiency our customers are seeking.”