The nascent market for 25 Gigabit Ethernet (GE) is set to grow over the next four years, but it still won’t hit double-digit market penetration. The latest IHS Infonetics SAN and Converged Data Center Network Equipment report forecasts that 25 GbE port shipments will represent nine percent of all ports shipped globally by 2019.

The vast majority of all ports shipped in 2014 were 10 GbE ports, and the same is expected to be the case in 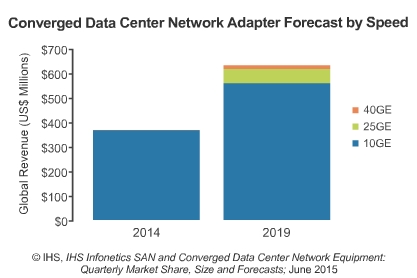 “With its higher bandwidth, the 25/100 GbE architecture is attractive to large cloud service providers and enterprises looking to migrate from 10 GbE switching and server connectivity to 100 GbE switching and 25 GbE server connectivity in the data center,” Cliff Grossner, Ph.D., research director for data center, cloud and SDN at IHS, said in a statement. “QLogic continues to prepare for the launch of 25 GbE, demonstrating interoperability with HP and Dell switches after doing so with Broadcom.”

Broadcom announced its plans for 25 GbE silicon at the end of 2014.

25 GbE is still in its very early days, as the first public efforts to develop a 25 GbE specification only got started with the formation of the 25 Gigabit Ethernet Consortium in July 2014.

In April of this year, the 2550100 Alliance got started to push its vision forward for 25 GbE.

As to why 25 GbE is a good place for Ethernet to go, John D’Ambrosia, chair of the Ethernet Alliance, explained to Enterprise Networking Planet at the end of 2014 that 25 GbE makes a lot of sense from a capital expenditure perspective. He added that as 25 GbE matures, it will represent a viable solution for many markets.