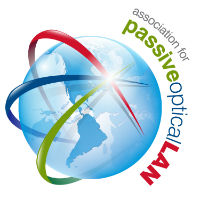 Copper, watch out: the APOLAN is gunning for you.

In February of this year, Corning, IBM, SAIC, TE Connectivity, Tellabs, Zhone, and 3M committed to a new joint endeavor, the Association for Passive Optical LAN (APOLAN). A month later—around the same time that Frost & Sullivan predicted that “the optical network will soon be the framework of every industry”—the APOLAN held its founding meeting, drafted its bylaws, and elected its leadership. Now the organization has announced its mission. The APOLAN aims to advocate for worldwide adoption of passive optical LANs within the enterprise.

According to Dave Cunningham, Corning’s manager of passive optical LAN marketing and APOLAN president and board chairman, glass has overtaken copper in both the outside plant world and within the data center, but there’s still more work to be done. “The last bastion for fiber is the horizontal portion of the local area network, and we’re going to take it,” he said.

Until now, price and installation challenges have stood as barriers to fiber’s wider adoption. That has changed. Passive optical LAN, Cunningham said, is now “less expensive and easier to install than a similar copper network. Glass is ready to become that horizontal medium.”

So what can the APOLAN do to speed passive optical LAN adoption?

The organization’s immediate plans focus on evangelism. Brian O’Connell, APOLAN board member and TE Connectivity’s vice president of business development for enterprise networking, explained that the organization considers industry awareness and educational critical to success. Passive optical LANs have several technical and economic benefits, he said, but not everyone has been exposed to the advantages of a successful installation.

“Fiber doesn’t have the distance limitations of copper or the bandwidth constraints of cabling. It simplifies Move Add Change work and installation. It also eliminates the call for wiring closets on individual floors of multi-story, multi-tenant buildings; saves on space; and saves on power and cooling infrastructure,” O’Connell said. And the greater speed of fiber optics helps future-proof enterprises for upcoming 40 gig and 100 gig network migrations.

To reach systems design engineers, building architects, building owners, enterprise CIOs, and large enterprise IT departments, the APOLAN plans to provide research, whitepapers, and webinars, and to appear at trade events to discuss the topic.

Cunningham laughed off requests for a prediction about when passive optical LANs might become the enterprise default—”My crystal ball just rebooted,” he said—but expressed confidence that glass’s time has come. O’Connell echoed that sentiment. “In the next couple of years, we will see people looking at this technology as at parity with the technology in wide use now,” he said.

Funded by membership fees, the APOLAN is open to all organizations interested in promoting passive optical networking.