Tellabs Pushes for Fiber to the Enterprise Desktop

After nearly forty years in the business, telecom networking equipment provider and Association for Passive Optical LAN (APOLAN) founding member Tellabs is making a concerted push for fiber in the enterprise with its 100 Series Mini ONT, which the company describes as the world’s smallest optical network terminal. According to the company, the Mini ONTs solve many of the problems hampering enterprise adoption of passive optical networking.

The enterprise is a relatively new frontier for optical LAN, Tom Ruvarac, director of product management at Tellabs, told me, and current optical network terminal deployments pose challenges that have kept optical LAN from wider use. Current deployments typically feature rack-mounted ONTs in wiring closets and desk-mounted ONTs. Both styles involve unwieldy power supplies and battery backups, as well as a clutter of fiber, power, and Ethernet cables, all taking up valuable space. Installation also involves a significant materials and labor investment.

How Mini ONTs change the game 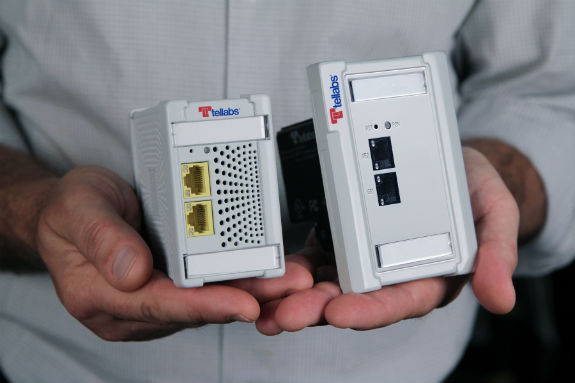 The 100 series Mini ONTs come in two form factors. The 120W fits in a standard wall outlet, the 120C into cubicle raceways. On the front, they present wall plates and Ethernet connectors identical to those of active Ethernet; on the back, they keep fiber and power connectivity safe within office walls. What this does, Ruvarac told me, is make installation process fast and easy, since the workflow remains the same as that of normal cabling. As an added benefit, the Mini ONTs offer 15 watts of PoE power. “We can power VoIP handsets, and depending on the radio, we can power WiFi devices, too,” he said. The terminals also come with expansion modules to add ports such as additional GbE with PoE.

When it comes to optical LAN adoption in the enterprise, “we’re definitely at the early stages,” Ruvarac said, but “we’ve seen a surge in activity” this year. Passive optical networking has seen some adoption within the U.S. government space. All four branches of the U.S. military have adopted it in some form, and, Ruvarac said, so have the departments of defense, homeland security, forestry, and energy. That, combined with early enterprise adoption of the technology by companies like Deltek, “has given a lot of credibility to optical LAN,” he said.

What’s needed next, from Tellabs’ and the APOLAN’s point of view, is more education. Engineering firms and architects in particular must learn about the benefits of optical LAN before the technology can truly take hold, Ruvarac said: “Engineering firms need to know about optical LAN as an option compared to just getting to the next level of CAT-x cabling—CAT-6 cabling is pretty thick stuff, for example.” Meanwhile, Ruvarac added, “Architects are used to designing buildings in a certain way, with so many square feet of wiring closet for so many thousands of square feet of floor space in an office building. If they have optical LAN at their disposal, then they have more freedom.”

Tellabs plays a significant role in APOLAN’s education efforts with. The company is a founding member of the group and chairs the marketing committee. Ruvarac himself serves on the board of directors, while Tellabs’ Joseph Marmion holds the position of APOLAN secretary.