VIDEO: ONF Chief on the Future of OpenFlow SDN

The ONF oversees the development of OpenFlow and its related protocols in an effort that has accelerated over the past year. Helping to the ONF and OpenFlow forward is its executive director, Dan Pitt. In an exclusive video interview with Enterprise Networking Planet, Pitt detailed the progress his organization has made in the last year, shot back at critics, and explained why OpenDaylight isn’t a competitive effort.

In a video interview in 2012, Pitt discussed the OpenFlow 1.3.x protocol which was finalized in May of that year. Over the last 12 months, that protocol has continued to evolve.

“A year ago, we declared OpenFlow 1.3.x a stable protocol for implementors,” Pitt said. “A lot of implementors are now focusing on 1.3.”

“We now require new features to be implemented with working code to prove that they actually do work,” Pitt explained. “We’re also bundling new features together, as sort of a separate little component, without having to constantly update the base spec.” 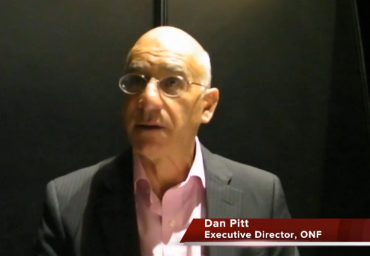 The base specification will remainder fairly stable, with new clusters of features added as they mature over time.

Contrary to what some in the market believe, the OpenFlow 1.3.x specification does not include a hardware-reliant component. Pitt emphasized that silicon is important, however, as is having hardware support.

To that end, the ONF is now helping to enable a hardware supply chain for OpenFlow that looks beyond software and virtual switches. The ONF is also in the process of assembling a chip maker advisory board.

Over the course of the last year, multiple vendors have emerged with SDN strategies that take aim at OpenFlow’s perceived shortcomings. For example, Juniper Networks has said that while it will support OpenFlow, its initial SDN controller plans don’t include it. Non-OpenFlow vendors have been pushing a general sentiment that OpenFlow is a forklift upgrade to a network.

“I think that all the incumbents have now announced support for OpenFlow,” Pitt said. “So they are saying one thing, but look at what they are doing.”

Pitt emphasized that the ONF is trying to move networking into a standards-based environment, where users are not locked in by vendors and proprietary protocols.

“OpenFlow is the standard, and it serves user needs,” Pitt said. “You’d have to ask the vendors how well it serves their individual needs.”

In terms of migrating to OpenFlow, in Pitt’s view it’s often just a question of downloading the client onto switches. HP and other vendors have announced support for OpenFlow on existing switches in such a manner.

“For a radically transformative technology, this one is the easiest one to migrate to that I’ve seen in my career,” Pitt said.

In April of this year, many of the biggest names in networking (and also ONF members) joined together with the Linux Foundation to form the OpenDaylight Project. OpenDaylight aims to build an open source SDN platform that some have seen as competitive to the ONF’s efforts.

Pitt emphasized that OpenDaylight still relies on OpenFlow. The two efforts are not competitive.

“OpenDaylight is a vendor-led group that is implementing what we produce and building on top of what we produce,” Pitt said. “We’re delighted to see open source industry effort to instantiate these abstract standards. That’s exactly what should happen.”

The Future of the ONF

“We are about much more than OpenFlow, but we are the ones doing the OpenFlow protocol, because if we don’t do it, no one else will,” Pitt said. “It’s going to be the vendor-neutral standard way to communicate between a separated control plane and a distributed forwarding plane.”

Watch the video with Dan Pitt below.

Sean Michael Kerner is a senior editor at Server Watch and InternetNews.com. Follow him on Twitter @TechJournalist.

Sean Michael Kerner
Previous articleVXLAN: Beyond the Hype
Next articleCisco Optimistic About SDN as Revenues Grow