“Latin America and Asia/Pacific are setting the pace for growth in the WLAN market as those regions continue to upgrade to 802.11ac infrastructures with individual countries in the regions at different stages of technology maturity,” Petr Jirovsky, research manager, Worldwide Networking Trackers at IDC, stated. “Overall, IDC forecasts moderate growth in the coming years for the entire enterprise WLAN market.”

While the overall WLAN market is growing, it is not growing uniformly across different market segments. All of the growth for WLAN revenues is coming from enterprises, as the consumer WLAN market is actually in a state of decline.

The 802.11ac standard is the dominant speed in WLAN today, representing the majority of port shipments and revenues.

802.11ac was first formally certified by the Wi-Fi Alliance in June 2013. The 802.11ac standard was accelerated in January 2014 with an update that enables the Wi-Fi standard to deliver up to 7 Gbps of wireless throughput.

Cisco continues to lead the WLAN market, holding 43.6 percent of market share, according to IDC. 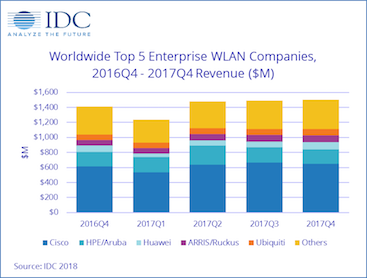